Tuesday, I wrote about changes in the donation allocation at Mercury One. The Texas-based charity was founded by Glenn Beck with David Barton as the current chair of the board of directors. After years of allowing donors to focus their giving to a particular cause (e.g., disaster relief, helping refugees or even the general administration of the charity), Mercury One announced on their blog that all donations from now on would go into one fund:

Beginning in March 2017, Mercury One is streamlining the way we receive and allocate donations. Now, all gifts will go directly to Mercury One. We want to be able to respond more swiftly, and to do this, we are consolidating future gifts to a single account so we can be more nimble and react immediately when a need arises.

Despite this posting, Mercury One has not eliminated solicitations for giving to specific causes. For instance, when you land on the Mercury One website, at the very top of the page, there is a button that when clicked takes you to another website soliciting donations for “The Nazarene Fund.”

Up until recently, that fund has been dedicated to rescue and restoration of refugees. I asked Mercury One how much money was left in that fund but I did not get a reply.
Just a few days ago, a donor landing on Thenazarenefund.org and then scrolling toward the bottom of the page would find an image with Nazarene Fund t-shirts and a caption that reads “All proceeds go to the Nazarene Fund.” 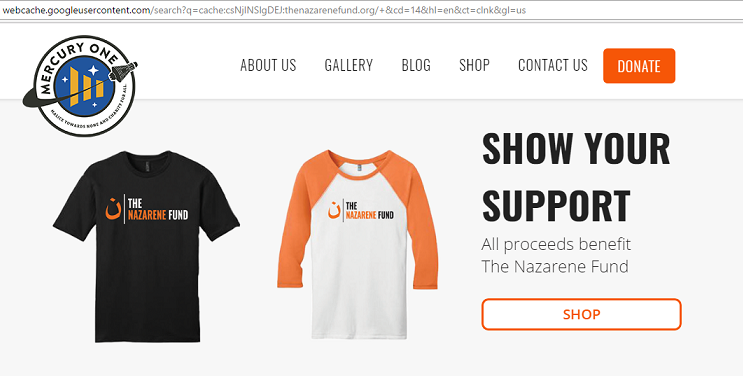 Now, the same images are there but with a different caption: 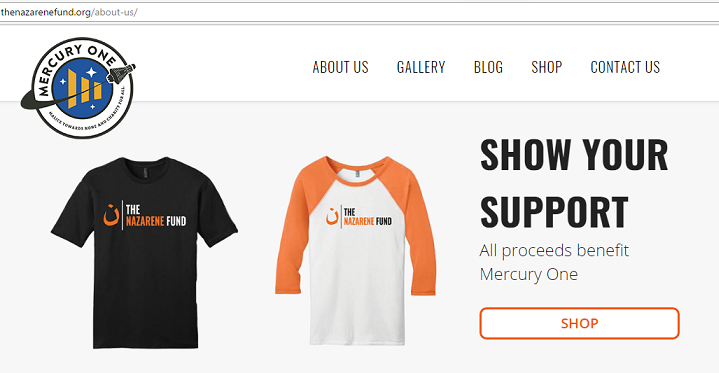 While it is good that the caption has changed, it seems odd that the Nazarene Fund page is still active. Is there a dedicated Nazarene Fund or not? According to the new donation allocation policy, there is only one account. However, having a page advertising specific activities associated with a specific fund implies that donations to that page will go toward the purposes of that fund. If the new policy is truly in effect, then donations made from the Nazarene Fund page could actually go to some other purpose.  The longer this stays up, the more likely it is that donors could question how donations given as a response to this solicitation have been used.