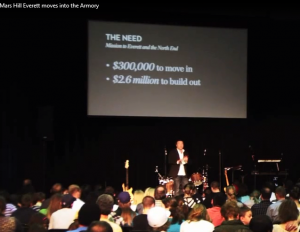 For Mars Hill history buffs, Wenatchee the Hatchet has done a service for you. Go check out his post with links tagged and organized topically.
Also, wife of a former elder Jen Smidt has spoken out about her experiences at Mars Hill. According to Jen, she once said something Sutton Turner didn’t like and the next day Turner rebuked her husband for it.
WtH has a lengthy account and analysis which I won’t try to compete with.
It occurred to me recently that a final accounting of Mars Hill was never made public. I assume the assets were sold and divided up between the legacy churches but no final reporting ever became public. Secrecy persisted until the end.
For all of my posts on Mars Hill Church and The Trinity Church see below:
Mars Hill Church
The Trinity Church (the post-Mars Hill church Mark Driscoll started in Phoenix)