At the first of each year, Gateway Church leaders ask members to fast for 21 days. The December issue of Gateway Life magazine describes the event: 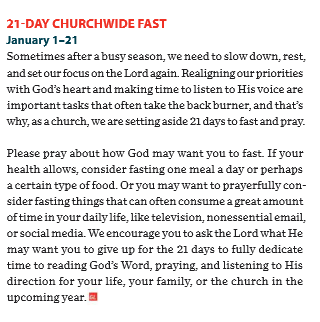 This year, God has given Gateway Church pastor Robert Morris a break from the fast. Because of the inauguration and the Super Bowl, Morris will do something different. Watch:

But even if you’re not able to attend the conference, the thing that I love about the first of the year at Gateway is that we come together.  Whether it’s through the fast, or the devotional, or through the conference.  But we come together and we recommit ourselves to the Lord.  So I wanna tell you thank you so much for, for that.  And just encourage you to fast some way.  Just so you know, I’m gonna go a little longer than 21 days than what the Lord has told me.
And someone asked me about this awhile back because, I’m going to the inauguration in a few weeks and then there’s the Super Bowl in February.  And I have a reprieve for the Inauguration and for the Super Bowl.  From headquarters.  So, the Lord and Debbie told me that we’re gonna do something different during that time.  So, but I just want to encourage you.

And why not? The inaugural menu looks very special. 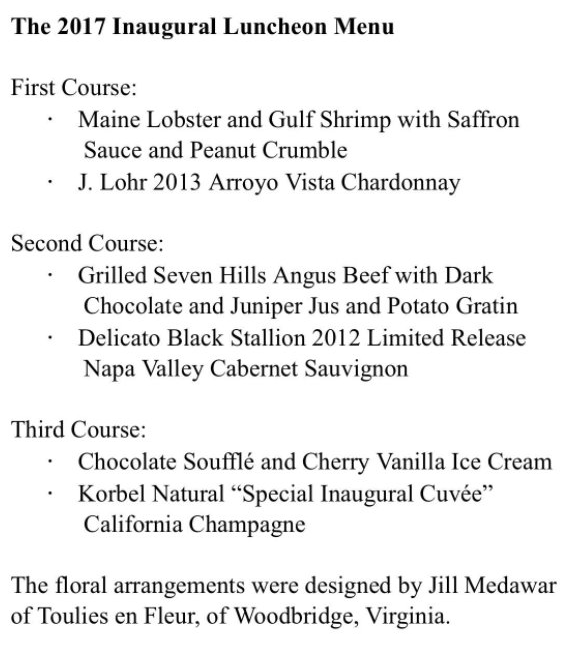 Surely the Lord wouldn’t want his servant to abstain from any of that.
Gateway and Morris have been strong supporters of Donald Trump. A Gateway source told me that Franklin Graham spoke at Gateway’s First Conference (Jan. 1-4) and called Gateway the greatest single backer of his Decision America Tour. That 50 state effort was, in essence, a GOTV drive for the GOP and Donald Trump.