The latest news to hit involving Donald Trump is potentially the most troubling. A leaked report (available to read at Buzzfeed) from a retired intelligence operative claims Vladimir Putin authorized a scheme to cultivate Trump as an ally and conspired with Trump’s campaign to undermine Clinton. There are accusations of sex tapes involving Trump and treasonous behavior. At least, it will function like the Trump-fueled birther conspiracy. At most, the document reveals treason and impeachable offenses.
There are so many distractions about the story on social media. A major distraction is Trump who earlier this morning went on a major tweetstorm. 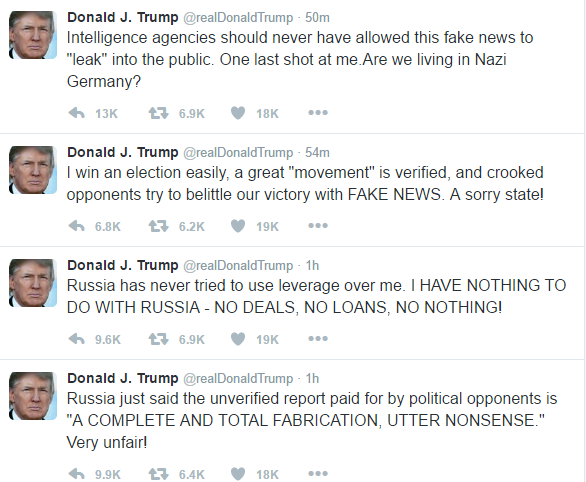 Trump’s denials are disturbing because they fly in the face of other information coming from credible sources.  I recommend an article by Benjamin Wittes, Susan Hennessey, and Quinta Jurecic and published at the Lawfare blog which provides a dispassionate analysis of the situation. Trump claims the document was leaked by “intelligence agencies” whereas Wittes and associates say that the document has been in wide circulation for weeks and isn’t even classified.

And this material, in fact, does not come from the intelligence community; it comes, rather, from private intelligence documents put together by a company. It is actually not even classified. (source)

Trump did not win the election easily and didn’t win the popular vote. We don’t know that these stories are true but we don’t know if they are totally fake either. The point of Wittes, Hennessey and Jurecic is that the intelligence is unverified. It may be true or it may be false. Clearly, it is in Trump’s interests to deny and reframe the report as an attack piece. However, it is not in our interest as citizens to look the other way. There is circumstantial evidence to make some of the claims seem quite credible. Instead of believed or disbelieved, the claims should be investigated and since Trump won’t do it, Congress should.
Since Trump won’t release his personal and business tax returns, he does not deserve the benefit of the doubt when the security of the nation is at stake. The report alleges shady dealings around the world but not necessarily in Russia. A release of those tax documents could provide insight into the allegations. On Russian investments, Trump and the report agree – he wasn’t able to score a big deal.
The Trump Campaign and Russian Opposition Research
During the election, we know that Trump recited false information about Kurt Eichenwald which would have been available via Russian sources. From Eichenwald’s Newsweek report dated 10/26/16:

Updated | I am Sidney Blumenthal. At least, that is what Vladimir Putin—and, somehow, Donald Trump—seems to believe. And that should raise concerns not only about Moscow’s attempts to manipulate this election but also about how Trump came to push Russian disinformation to American voters.
An email from Blumenthal—a confidant of Hillary Clinton and a man, second only to George Soros, at the center of conservative conspiracy theories—turned up in the recent document dump by WikiLeaks. At a time when American intelligence believes Russian hackers are trying to interfere with the presidential election, records have recently been fed to WikiLeaks out of multiple organizations of the Democratic Party. But now that I have been brought into the whole mess—and transformed into Blumenthal—there is even more proof that the Russians are not only orchestrating this act of cyberwar but also really, really dumb.

Eichenwald’s report (read the whole thing) demonstrates how Russian sources placed disinformation into the Russian press which was used by the Trump campaign. It was almost as if the campaign had the information before it was published in the Russian press.
Regarding the credibility of the current Buzzfeed document, Eichenwald’s report cuts both ways. On one hand, it lends credibility to the charge that the Trump campaign had a working relationship with Russian intelligence sources who sought to undermine Clinton. On the other hand, Russian disinformation efforts could also be behind some of the more salacious aspects of the Russian intel memo. Given the relevance to national security, Congress should investigate.
Sitting here as a citizen, I am worried about the implications of this story. To me, it is obvious that Trump is stretching the truth to defend himself which doesn’t inspire confidence. I am worried that Republicans are going to roll over just to make nice with the incoming administration. I am thankful for Republicans like John McCain who seems to be taking this matter seriously. Given the consequences, we should be able to agree that an investigation is warranted.