In 2014, when Gospel for Asia moved to the current Wills Point, TX location, staff were told they could pick out a plan to build a brand new home. Eventually, staff were charged a monthly fee to live in the complex after the homes were build. Without special permission, no deviations were allowed in the plan selected from the options offered by Altura Homes.
Given K.P. Yohannan’s teachings on frugal living, one might expect his home to be the most modest with very few alterations. However, in documents I have recently received, another picture emerges. Yohannan’s home is by far the most costly and he was allowed to make upgrades to his custom built home. See below for just one section of the very long list of over 80 homes built in the GFA complex:

K.P. Yohannan’s house costs are circled in red.  His home cost $228,240 whereas no other home exceeded $135,000. He also made costly changes to the pre-existing plan making it a custom built home.  See below for a summary of one change order (see the entire six page itemized change order here). 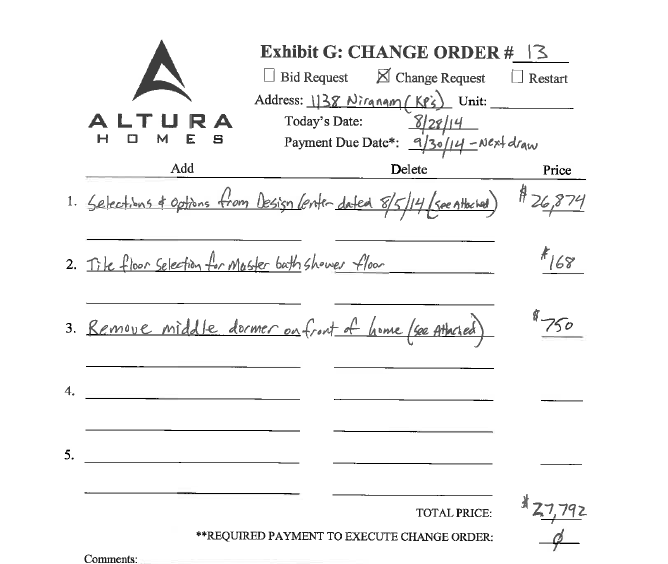 The costs involved here are not exorbitant. The important consideration is what K.P. Yohannan tells donors in his books versus what GFA has become here and in India. From Yohannan’s first book, Revolution in World Missions:

Religion, I discovered, is a multi-billion dollar business in the United States. Entering churches, I was astonished at the carpeting, furnishings, air conditioning and ornamentation. Many churches have gymnasiums and fellowships that cater to a busy schedule of activities having little or nothing to do with Christ. The orchestras, choirs, “special” music—and sometimes even the preaching— seemed to me more like entertainment than worship. Many North American Christians live isolated from reality—not only from the needs of the poor overseas, but even from the poor in their own cities. Amidst all the affluence live millions of terribly poor people left behind as Christians have moved into the suburbs. I found that believers are ready to get involved in almost any activity which looks spiritual but allows them to escape their responsibility to the Gospel.

I actually agree with this criticism of the Western church. However, as we have seen over the last year, GFA has become part of the religion business as a multi-national corporation.*

*For those new to my posts about Gospel for Asia, start at the beginning and work your way back.  You could also start with this post.