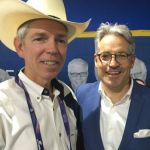 Since the Bible doesn’t reveal who we are to vote for, I am not worried about it. I think people who vote for Trump are wrong but I am not ready to speak for God on the subject. My conscience is clear.
But never fear, David Barton knows what God thinks and he is dealing the fire and brimstone.
Right Wing Watch has the audio.
A questioner asks Barton how to explain to her anti-Trump friends that we can’t have the perfect candidate. She says people are getting stuck on little things.  I don’t have time to do a transcript of the whole mess but I linked to RWW which has the audio. Essentially, Barton’s advice boils down to God wants you to vote for Trump and you better do it or else.

I will account to God and I have to vote because He put that ballot in my hand and I’m going to have to account to Him for what I did with it. And I can’t use the false standard of I have to have somebody perfect because there is nobody perfect except for Jesus and, by the way, when He was on earth, they didn’t think He was perfect; we only think He’s perfect now. Back then, they called him a winebibber and a glutton; he had all sorts of campaign ads run against him. So nobody is going to fit the criteria, so let’s get God’s mind on this thing instead of finding excuses.

As I pointed out in a recent post and Jonathan Merritt wrote today at The Atlantic, all these Trumpvangelicals need to apologize to Bill Clinton.  At one point, he asked forgiveness and many evangelicals just banged on about how much character matters. Now, Trump gets forgiveness he doesn’t even ask for.