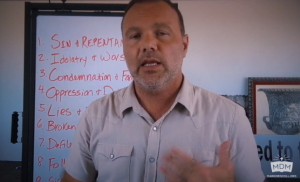 Mark Driscoll’s most recent video takes on the question: is anorexia a sin (click the link to view the video)?
The prompt for the video is a letter from a young woman who says she has struggled with anorexia for years. In her note, she asks Driscoll if anorexia is a sin.
First, Driscoll expresses appropriate concern for the writer. I share that concern. Anorexia is a baffling condition. However, there are good treatment protocols and with competent help, those who struggle with it can find help.
Unfortunately, Driscoll doesn’t refer her to anything like competent help. She tells him that her pastor said an eating disorder is a disease and her Christian 12 step program said it is rooted in sin. She wants to know what Driscoll thinks.
The right answer is that she has a condition that should be treated medically. Sounds like she needs to get out of that 12-step group.
From his website, here is the list of factors he uses to answer her question. 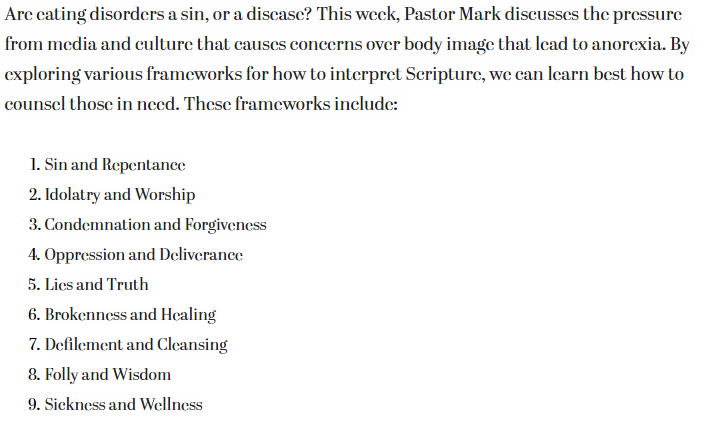 In Driscoll’s way of thinking, anorexia could be almost anything, including idolatry or the work of demons. Speaking of demons at 8:40 into the clip, Driscoll says:

This is where Satan, demons are lying to you, tempting you. The Bible says that Satan is the accuser of the children of God. He accuses them day and night in Revelation 12:10 there are accusations. If you start realizing this oppression, you can get out of it by acknowledging what God has to say. Oppression, an accusation, is often in the second person, you are unlovable, you need to punish yourself, you don’t appear attractive, whatever the oppression is, it’s telling you something that’s just not true. And so, what you need to understand is that’s demonic, that God doesn’t speak to you that way and if you’re hearing in the second person, maybe someone is talking to you, a spiritual being is lying to you, I’ll get to that in just a moment, and the way out is deliverance, you have victory in Christ, Colossians 2 says He has disarmed and defeated the powers and principalities of evil, triumphing over them through his victorious forgiveness of sinners on the cross.

He adds that the oppression may have come on her and that it might even be generational in her family such that women in her family are “under this kind of demonic torment and oppression and God wants you to rebuke that and walk in freedom and deliverance.”
This point reminds me of Driscoll’s Mars Hill Church spiritual warfare sermons where he describes demon trials for oppressed people.
Driscoll’s last point gets closer to where he should have started and ended. He tells the young woman that she may have medical problems, although he doesn’t specifically refer her for treatment.
For more information on eating disorders, check out this NIH website.
PS – I find some of what Driscoll said about acceptance of body image to be incompatible with what he and his wife wrote in Real Marriage about cosmetic surgery. Read Tim Chailles reaction to the Driscoll’s approval of cosmetic surgery.