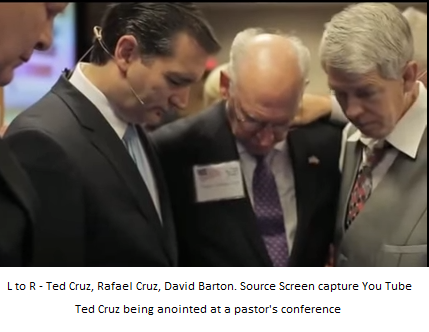 Rob Gagnon and Edith Humphrey writing at Christianity Today say no.
Gagnon and Humphrey respond mainly to John Fea’s writings on the subject.
I think Cruz likes to hang out with seven mountains dominionists, including his father and David Barton.
What would be nice is to hear from Cruz himself. I would like to know if he agrees with his father that he is a “king” who will help bring about a great transfer wealth from the pagans to the Christians, or at least the dominionist Christians. Does Cruz believe all that seven mountains stuff?
I wish Cruz would give a speech or an interview where he addresses the matter. This will dog him until he clears it up. I am much less interested in Gagnon and Humphries opinion and more interested in hearing him talk about his views of seven mountains dominionist teaching.
UPDATE: John Fea responds to Gagnon and Humphrey on his blog. As usual, John raises some key points. Like me, he wants to hear from Cruz about his reliance on his father, David Barton and Glenn Beck. Here’s what Fea has to say about Cruz and Barton:

Cruz needs to answer for his connections to David Barton.  Over the last couple of weeks Barton has been talking openly about Seven Mountains Dominionism.  He is opening schools at Bible colleges around the country to teach this view. Let’s not forget that Barton runs a Cruz super-PAC.  This means that Barton, an outspoken dominionist, is raising a lot of money to get Cruz in the White House.  Guilty by association?  Perhaps.  Only Ted Cruz can set the record straight. Let’s remember that this guy is running for President of the United States.  I think he needs to come clean on his connections to people like Barton and Beck.

Gagnon and Humphrey quote Robert George as saying that calling someone a dominionist is McCarthyism and a smear tactic. I suppose it could be a smear to some (if you call me a dominionist, it would be a smear) but we should remember that Cruz’s father and his close advisor David Barton embrace the seven mountains teaching of Christian dominion. Cruz is surrounded by people who see it as their Christian duty to take dominion over the culture and the government.