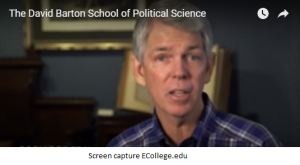 Ecclesia College, a Christian college in Arkansas, has created the David Barton School of Political Science. I wonder if my political scientist co-author on Getting Jefferson Right, Michael Coulter will want to move South.
Right Wing Watch brought the news to a grateful public.
The Ecclesia press release is here. And you can watch:
[youtube]https://www.youtube.com/watch?v=P0ha3wGLVZA[/youtube]
Now I am confused. Should we send our children to Ecclesia? Although it is a Christian college, Barton says half of young people going to Christian colleges will renounce their faith. Probably, we should just keep them home.
You Say You Want a Revolution?
Barton thinks one might be coming.  It is all in the word betrayal. Barton thinks psychologists got a thing about the word.

[Voters] feel betrayed. And when you look at betrayal and you look at what psychologists say that represents, that’s a scary term. It’s not like someone has just crossed me — betrayal is deep stuff.

Psychologists also use another word — projection — which just might be going on here. If Ted Cruz, the chosen one, doesn’t get the nomination, there might be some serious betrayal being felt in the Cruz camp which could lead to the R-word.
[youtube]https://www.youtube.com/watch?v=BGLGzRXY5Bw[/youtube]