Yesterday, World Net Daily posted David Barton’s defense of his discredited book The Jefferson Lies. This is in preparation for a January release of the WND edition. The WND posting appears to be the same 40 page response he wrote in early 2013 in reaction to publisher Thomas Nelson’s decision to pull the book from publication due to historical errors.
The promotional material for the book promises a rebuttal to critics. If this 2013 document is that answer, WND might want to correct the errors in it. A good place to start would be with the story that Simon & Schuster plans to publish the book. In 2013, Barton claimed that Simon & Schuster planned to publish The Jefferson Lies. Yesterday, Barton and WND claimed the same thing: 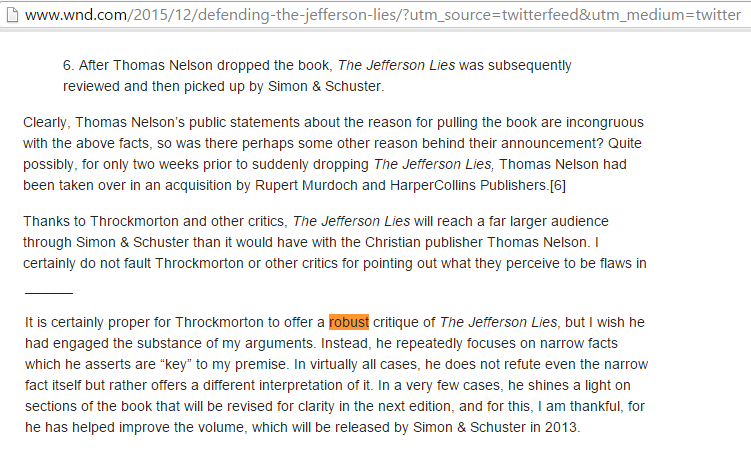 I asked Simon & Schuster earlier this year if there was any truth to this claim and the publisher’s representatives said the book would not be published by them.
I wonder if WND will correct this error.
The recycled spin continues on the WND book description. The original promotional material referred to Barton’s critics as “ a few dedicated liberal individuals and academics.” Now the WND book description calls us “bloggers and a handful of non-historian academics.”
This effort to obscure the response of historians, Christian and otherwise, to Barton’s work is a farce. The Jefferson Lies was voted “least credible history book in print’ by readers of the History News Network. Dozens of Christian historians wrote both Family Research Council and Focus on the Family in 2013 urging them to remove Barton’s work from their web pages. If WND editors cared about accuracy, they could just read their own website. In the article WND published yesterday, there is a reference by Barton to his Christian historian critics.

Only four of the ten scholars contacted by Richards actually provided any critiques of my work: Glenn Moots, Glenn Sunshine, Greg Forester (sic), and Gregg Frazer. Of these four, only Frazer specializes in religion and the American founding, but his critique did not even address The Jefferson Lies, and it is not clear that he even bothered to read it. Instead, he watched and criticized a twenty year old video entitled America’s Godly Heritage.

Moots, Sunshine, Forster and Frazer are all historians and they are all Christian (Frazer’s critique of America’s Godly Heritage — which is still commercially available — can be read in an earlier blog post). As I have demonstrated previously, there are more than a handful. Obviously, WND is hoping to cover up the facts.
A large part of Barton’s response in his WND article is to bash me, as if what team he thinks I am on matters. It is a sign of a weak argument when you spend little time on the facts and a lot of time on the personality of the person bringing the facts. The effort also appears to be designed to distract readers from the fact that I have a co-author — political science scholar Michael Coulter — and have published the work of numerous Christian historians on this blog (e.g., here).
The new narrative being promoted by WND is that Thomas Nelson pulled Barton’s book because of “political correctness.”

Yes, it was shocking that Thomas Nelson did the right thing. And it is shocking that some Christians try to create an alternative reality in order to sell books and gain political power.