Both Glenn Beck and David Barton have said in public presentations that Congress printed the first English Bible in America (Aitken Bible). Most recently, Beck told Fellowship Church in Fort Worth TX that the first thing Congress did after we won the war for independence was to print a Bible.
Barton has recently backed off slightly from that claim that Congress printed the Bible, acknowledging that Aitken printed it but still falsely portraying Congress as endorsing the Bible for use in schools (see video below). Barton’s evolution on the issue came after years of criticism from observers outside and inside the church. He finally shifted his story a bit after a Family Research Council vice-president deleted a video of Barton’s tour of the Capitol during which he told the false story. Watch Barton’s two stories:
[youtube]https://youtu.be/6K5ofr-VBvI[/youtube]
At 2:37 into the clip above, Barton appears on Glenn Beck’s show and told Beck that Congress printed the Aitken Bible. Beck apparently has not gotten the memo that Barton misled him because Beck spread that same false story on July 5 to the Fellowship Church.
Barton’s presentations still contain misinformation. In June, Barton spoke to the Osborne Baptist Church in North Carolina. There he again told an Aitken Bible story. Watch:
[youtube]https://youtu.be/93zX5xz7V_4[/youtube]
Barton Still Embellishes the Story
This clip may get a post of its own but for now, I want to demonstrate that Barton is still embellishing the story and making it say something it doesn’t. In this clip, Barton says Congress authorized Aitken’s Bible for the use of schools. As I have pointed out, the Congress didn’t mention schools; Aitken did. Aitken would have been happy to have schools use it, or Congress buy it for soldiers, or, as the ad below suggests, customers buy it in bulk. He invested a lot in his Bibles and wanted people to buy them.
In the clip above, Barton said:

Within months of the final battle at Yorktown, a plan is proposed to print the first English Bible in America.

As I pointed out on Tuesday, Aitken approached Congress with a petition dated January 21, 1781, nine months before Cornwallis surrendered at Yorktown on October 19, 1781. Barton wants to make the listener think we won the war and then Congress cooked up the idea to print Bibles. However, note how he tells the tale in the passive voice; he says vaguely “a plan is proposed.” Yes, a plan was proposed, but not by a legislator and not after the war ended. Aitken told Congress in January 1781 that he

hath begun and made considerable progress in a neat Edition of the Holy Scriptures for the use of schools,

The plan was proposed by Aitken, not Congress, and the plan was proposed nine months before the end of the war by a man who had already “made considerable progress.” Note that it was Aitken who told Congress that his Bible could be used in schools. Congress said nothing in response about it and the Congressional commendation did not mention schools at all. Barton tries to fool his listeners by taking Aitken’s words and putting them in Congressional mouths. Note that the ad below doesn’t mention anything about schools.
The ad below along with other evidence I have presented help to put the embellishments of Beck and Barton into some perspective. Aitken approached Congress with a proposal for them to review his work, and authorize his Bible as the version approved by government. Congress declined to make Aitken the official Bible vendor, nor did Congress take action to make his Bible the authorized version. Even though Aitken appears to be a Christian believer, he also needed to make back his investment as the ad below demonstrates.
This ad is dated August 11, 1782. Even though he had no Congressional commendation at the time of this ad, he announced that he would begin selling them in October. Aitken did not submit his Bible to Congress until September 9, 1782 with the proclamation dated September 12.  He wanted a commendation (who wouldn’t?) but he didn’t need it because the Bible was not a project of Congress. 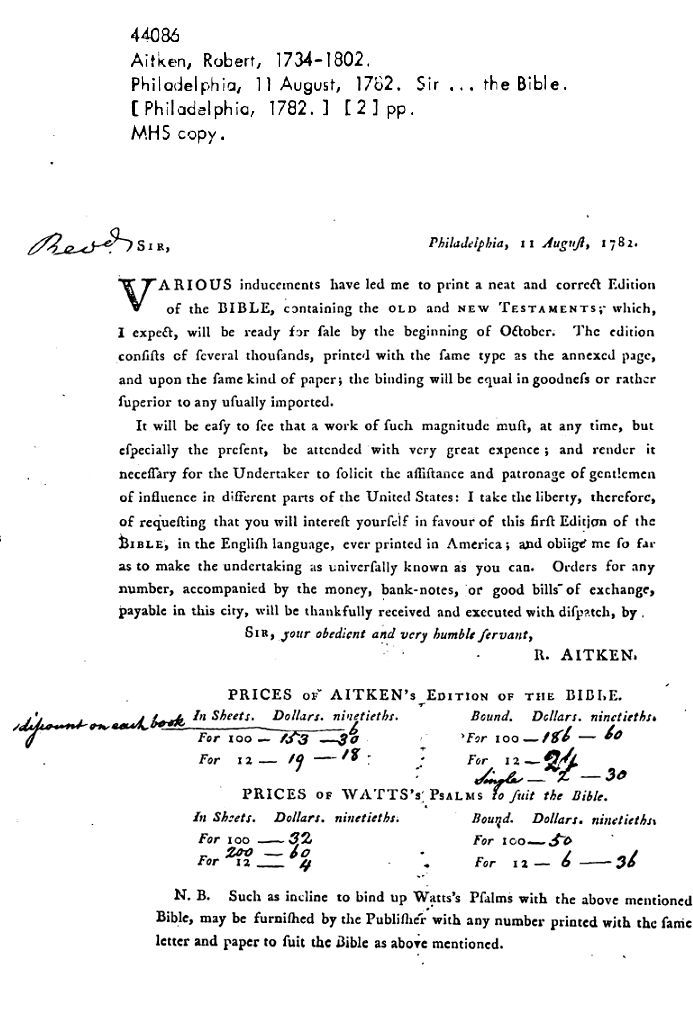 The top part of ad above is the identifying information from Early American Imprints. The rest of it is a solicitation from Robert Aitken offering to sell his Bible individually or in bulk at a discount. Below is a sample page from the Bible. 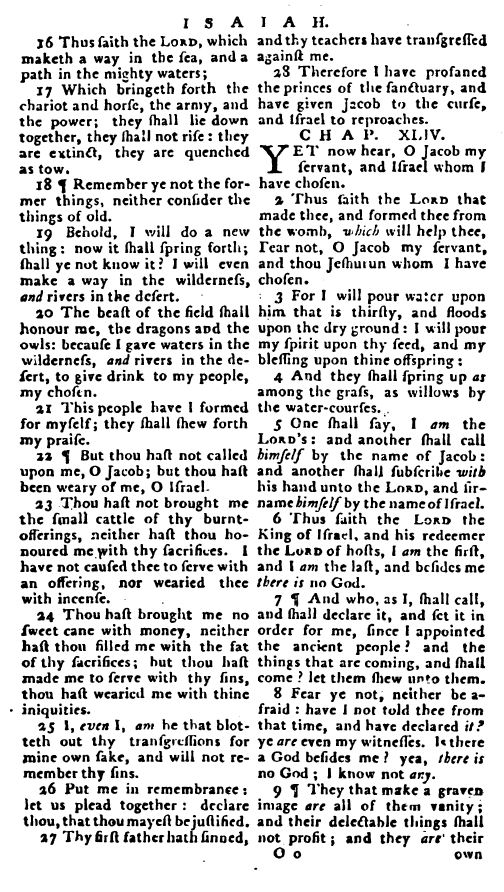 At some point, I hope someone else will ask Beck and Barton why they mislead their audiences with this story. In his Osborne Baptist speech, he says why he does it (listen to Barton near the end of the clip). He wants public policy to change to be in line with his preferences that public school children learn the Bible. He apparently thinks that twisting the Aitken Bible story helps his cause. As I have asserted before, I believe this deception is scandalous. It is a major story which is being mostly ignored by the Christian media and Christian leaders while Beck and Barton laugh all the way to the bank.