It has been nearly a week since I posted auditor Jason Watkins analysis of publicly available records of Gospel for Asia’s spending in 2012.  I sent the information to Gospel for Asia’s CEO, K.P. Yohannan, and COO, David Carroll as well as the president of the Evangelical Council for Financial Accountability Dan Busby. I asked them to provide information which would contradict Watkins’ findings. No reply.
Today, I want to post Watkins’ analysis of the spending in 2013. Over just these two years, if Watkins is correct, $90 million that GFA affiliates report as contributions to GFA in India do not show up in Indian reports (see both posts). 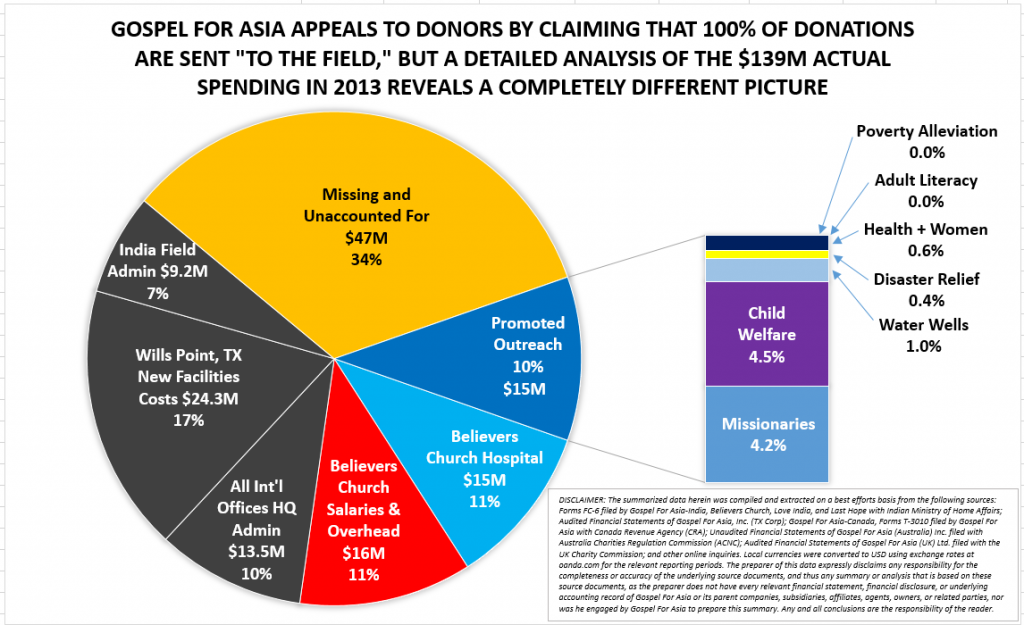 This is a similar break down as the 2012 chart.
I want to add that GFA may have some explanation for where the $47 million is. It may be that they give it away to other organizations in India (which might be a problem, see this report). If GFA ever responds with additional information, Watkins and I will adjust the analysis and other posts.
For those who are disturbed by these reports, I want to say that this analysis was done with publicly available records. These records are required by various governments and watchdog groups to keep organizations accountable. An examination of those records has led to this analysis and others I have previously published. I have in good faith asked GFA for explanation or additional information. However, COO David Carroll told me in May he would no longer answer my questions.
GFA stopped responding to my requests on May 7. For nearly eight weeks, GFA has remained silent as report after report has been published. To staff, leaders admitted requiring students to carrying cash to India, and told them it wasn’t illegal. GFA said their audit firm, Bland Garvey, said what they did was fine and legal. Then, they acknowledged that they have retained lawyers. However, at no time has GFA commented about why they violated their own financial integrity promises and possibly U.S. law to get hundreds of thousands of undeclared U.S. dollars to India.
My sources inside GFA tell me that some students have left the School of Discipleship over these issues and others including the conflicting stories over Believers’ Church bishops kissing His Eminence the Most Reverend Metropolitan K.P. Yohannan’s ring at ordination.
On the GFA website, CEO Yohannan promises*:

And if you hear something about Gospel for Asia that doesn’t sound right, would you please contact us—via email or phone—and let us know? Whenever there are accusations, we seek to immediately respond. We don’t walk away or cover it up. Most often, these are simply rumors or misunderstandings. And if we are wrong, we are happy for the opportunity to repent and make things right. We desire to walk in the light with the Lord and with our brothers and sisters.

I have been contacting you since May with no answers. Rev. Yohannan, you walked away 55 days ago.

*This was written before the recent controversies. There have been other issues over the years I haven’t begun to examine.