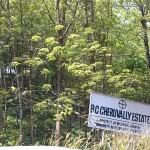 Today, Tehelka, an award winning Indian investigative magazine, posted an article about the loss of the Cheruvally Rubber plantation to the government. Even though I posted on this topic recently, I thought this article added some facts and was interested in the tone of the report.
Some snippets:

Kerala-based evangelist and self-consecrated archbishop Dr K P Yohannan has hit the headlines yet again, as the state government has recently issued orders to take over three estates his church body owns illegally. According to the government of India website, Gospel for Asia (GFA) – a Texas based charitable organisation – is funding ‘Believers Church’ for the purpose of charity to improve the condition of orphan children. Interestingly, both GFA and Believers Church are headed by Yohannan. The funds sent by GFA were used to purchase these estates instead of putting it to use for charity purposes.

I have been curious about perception in India regarding GFA’s purchase of land for commercial purposes. The writer of this article takes the position that the foreign contributions were used to buy commercial properties rather than for the intended purpose. This is a serious charge and one which GFA should address.

However, it has been learnt that Yohannan and his trust had spent Rs 300 crores on the plantation property. With the government now taking over the land, BC will in all probability face losses on their investments in these estates. Moreover, BC would possibly be ineligible for any compensation as Harrison Malayalam sold the property to BC when the former had no right to sell the property. After the purchase, however, the property was mutated in the name of the Believers’ Church and tax was being paid by the BC itself under the Plantation Tax Act.

Instead of $14.3 million, as I reported earlier, this article claims the price was much higher — $68.5 million. However, no source was given for the information which makes it impossible to verify.
An implication of this report is that a massive amount of donor funds may be lost due to the purchase of this property. Although GFA in India may have believed it had the better legal case, it is a legitimate question whether or not donor money should have been risked in this manner.
GFA has remained silent about a number of concerns recently raised by donors, former staff and students. Prominent among them is the report by former students that they were told to carry cash in backpacks and suitcases to India, seemingly at odds with American and possibly Indian law.