Barton also won in court against W.S. Smith, a self-described atheist who published an online article in 2010 calling Barton “an admitted liar” whose “books have been picked apart time and again and exposed as fallacious.”

Smith was a no-show throughout the lawsuit, disappearing shortly after Barton sued him in September 2011. Barton’s legal team hired a private detective and published notices in Texas newspapers statewide in an unsuccessful attempt to find the elusive writer.

Smith disappeared after he boasted, in an email to Huffington Post columnist Chris Rodda that he was “happy to meet” Barton in court “because the truth in [sic] on my side.”

It is true that a W.S. Smith was dismissed from the suit via the filing of a notice of non-suit. However, the reason the man was dismissed was because he was the wrong W.S. Smith. The W. S. Smith served with the defamation complaint was not the Examiner.com writer. See this explanation from a letter to the Parker County TX judge.

Thus, the W.S. Smith of Keller, TX was released from the suit. I am sorry for the error in my original reporting and have made a correction in that post. The Parker County TX records I had access to at the time did not provide that information.

So what happened to the writer of the Examiner.com article? Apparently, he disappeared and did not answer any communications from the court. Mr. Aman’s description is accurate until the last sentence in the block quote above: “Three years later, a Texas court found Smith’s assertions about David Barton both false and defamatory.”

W.S. Smith never turned up. In a case where a defendant doesn’t appear, Texas law provides that a judge can appoint an attorney to defend an absent defendant. However, Barton’s lawyers had another idea. They filed a motion for default judgment instead. Essentially, Barton asked the judge to find in Barton’s favor without the benefit of a trial. As you can see from the documents linked below, that is what the judge did.

First, read the argument Barton’s attorney made to Judge Quisenberry in the Motion for Final Default Judgment.  It is too long to reproduce fully but the main requests and rationale are below.

Texas law requires a judge to appoint an attorney on behalf of a non-appearing defendant in a case such as Barton’s.  However, Barton asked the court not to appoint an attorney to defend the claims of Smith as required by the Rules of Civil Procedure. See the Texas rule below (the full rule is at Texas R. Civ. P.  244) as cited in Barton’s Motion for Final Default Judgment. 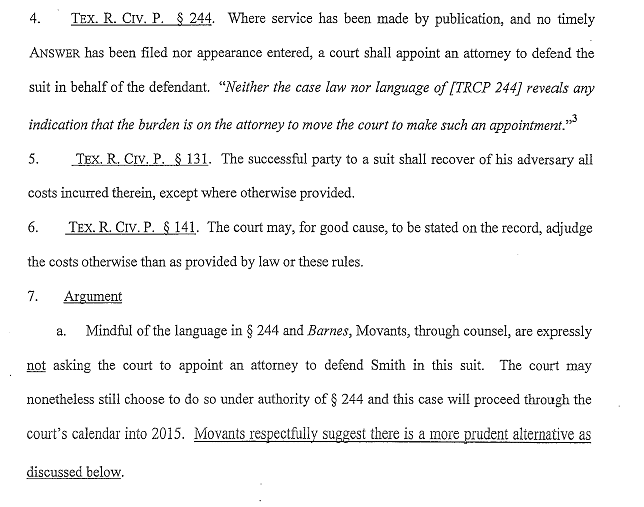 Barton’s suggestion is to simply find in Barton’s favor without adhering to Rule 244. Barton’s attorney argued that Smith will not pay court costs if he loses the defamation case in absentia and so there is no use to appoint an attorney as Texas rules require. According to Barton’s motion, the court should resolve the “Gordian Knot” by simply declaring a default judgment in Barton’s favor. Note that the damages are nominal and Smith is ordered to pay $20. 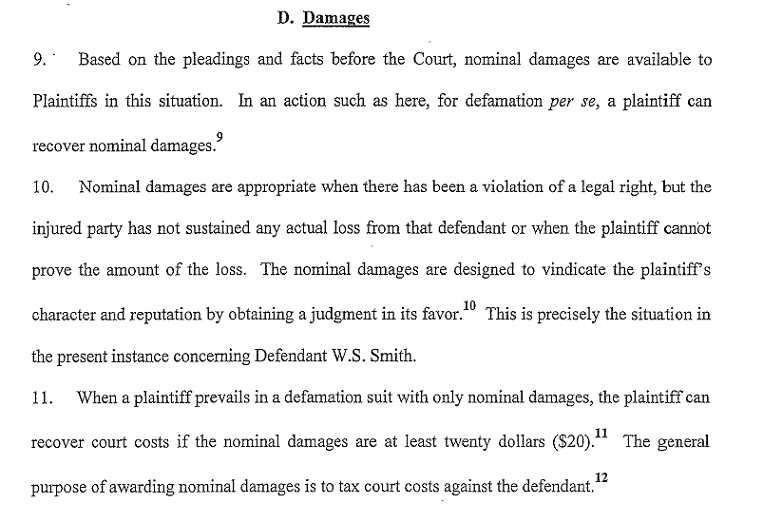 Two days later, Judge Quisenberry granted the motion and signed the Order of Final Default Judgment. As you can see, the order says the judgment is entered in favor of the plaintiff Barton and $20 is awarded as nominal damages. 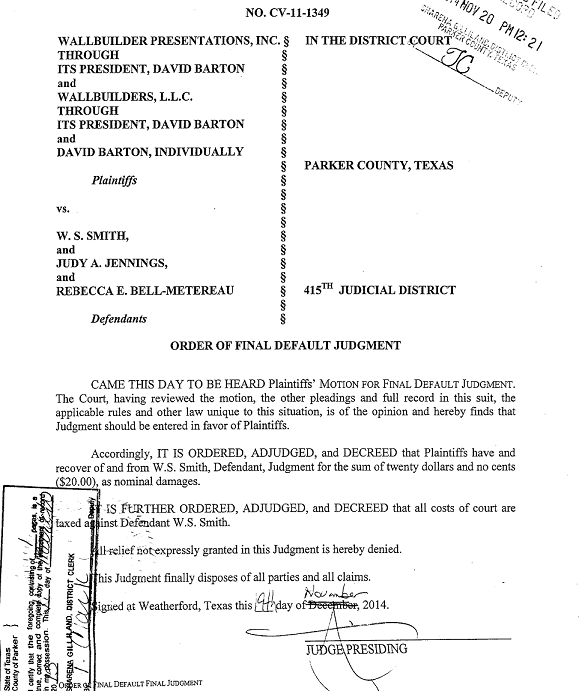 The judge did not declare Smith’s claims to be false and defamatory in any direct manner. If the judge had followed Texas law to the letter, a trial could have been held to actually review the claims made by Smith that Barton said were defamatory. However, Barton asked the judge not to do that. To use a sports analogy, the other team didn’t show up and Barton won by forfeit.
In Texas, default judgments are frequently overturned. If Smith emerged, he could probably challenge it and get a trial.* However, it seems unlikely that this will happen. Barton won due to a friendly default judgment but not because his work has been vindicated in any real, substantial manner.
At the end of the day, Barton claims that the Constitution quotes the Bible verbatim, that violent crime has risen 694% since 1963, that he played NCAA Division One basketball with Oral Roberts University and many other false claims. Claims like these are still false, default judgment or not.

*According to an application of Rule 244 in Isaac v. Westheimer Colony Ass’n, Inc., 933 S.W.2d 588, 591 (Tex.App.-Houston [1st Dist] 1996, writ denied), there may be basis for challenge to the default judgment. In that case, the court held that “[T]here is no evidence in the record of the trial court having appointed an attorney ad litem in [defendant’s] behalf. Absent strict compliance with the essential requirements of [TRCP] 244, a trial court commits reversible error.”
Obviously, I am not an attorney but this certainly seems to provide basis for questioning the default judgment.
I also found evidence that Rule 244 may be modified by the Texas Bar.