The third video in Jack Hibb’s mini-series (see a previous post on a prior episode) with David Barton features Hibbs trying his hand at historical interpretation. Watch Hibbs talking about Washington and Jefferson as slave owners (for context, here is the complete segment).

In this clip, Hibbs makes some Bartonesque statements about Washington and Jefferson. Below I give the claim and then after that what I believe to be the truth.  Hibbs said:
1. George Washington was one of the ten wealthiest men in American at the time.
This may be true. Washington was certainly wealthy and may have been in the top ten, although I cannot find a source to that effect.
2. George Washington was a good horseman.
I believe we can all agree to that.
3. Washington’s personal slave William (Billy) Lee was the second best horsemen after Washington.
By all accounts, until he injured his knees, Lee was able to keep up with Washington on horseback.
4. Washington would not allow his attendant (William Lee) to be called a slave.
I searched Washington’s papers for evidence relating to this claim and found nothing to support it. In his will, Washington called Lee, his “mulatto man William.” Elsewhere he called him “my mulatto servant Billy” (see the letter to the Connecticut Journal below). It is true that Washington provided good care for William Lee, but there was no confusion about Lee’s status as a servant. 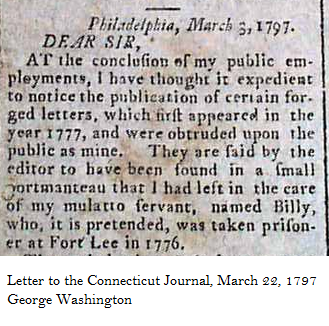 5. A quarter or half of Washington’s estate went to William (Billy) Lee.
This is a fabrication. In Washington’s will, Lee was given his freedom, a monthly stipend, and a place to live at Mt. Vernon if he wanted it. The following excerpt is from Washington’s will:

And to my Mulatto man William (calling himself William Lee) I give immediate freedom; or if he should prefer it (on account of the accidents which ha<v>e befallen him, and which have rendered him incapable of walking or of any active employment) to remain in the situation he now is, it shall be optional in him to do so: In either case however, I allow him an annuity of thirty dollars during his natural life, whic<h> shall be independent of the victuals and cloaths he has been accustomed to receive, if he chuses the last alternative; but in full, with his freedom, if he prefers the first; & this I give him as a test<im>ony of my sense of his attachment to me, and for his faithful services during the Revolutionary War.

Commendably, Washington recognized his “mulatto man William’s” faithful service and provided him with monthly living expenses and a place to stay. Lee did not own any part of the estate.
6. When Jefferson went to Europe (France), he took slaves with him.
That is true. Among the slaves, he took James Hemings, the older brother of Sally Hemings. Sally later accompanied Jefferson’s youngest child Polly to France to live with Jefferson.
7. It was illegal to educate slaves (according to the crown of England).
I don’t know why Hibbs mentioned the crown of England, but it was not illegal to educate slaves in Virginia for most of the period of time Jefferson owned slaves. Schools for Black children existed in Virginia and offered classes for slave and free children. For instance, Ann Wager was a teacher at a school in Williamsburg, VA from 1760 until 1774. Samuel Davies, a Presbyterian minister, educated slaves as a means of converting them to Christianity. By 1819, however, Virginia greatly restricted slave gatherings so that classes were viewed as possible meetings to plan rebellion. With most statements about the founders, it is important to specify a time period as a part of a claim. In the case of the founders, they lived and owned slaves when slaves could be educated and freed but also during times when such freedoms were restricted.
8. Jefferson had his slaves educated.
According to the Monticello website, there is no record of it. Jefferson’s family members taught some of the slaves to read but there is no record Jefferson did anything systematically to educate his slaves. In an aside to a friend, he proposed that his system of public education might include slave children but this never was implemented. Jefferson also believed that freed slaves should be educated before being removed to a colony outside of America. He favored somewhere in the West Indies.
9. Jefferson demanded that his slaves be well versed in the Scriptures.
I can’t find anything that supports this. If anything, Jefferson took a hands off attitude toward slave religious observances (again, see the Monticello website). Hibbs indicated that this claim is based on a visit to Monticello. I have also visited Monticello and I don’t recall anything I saw or heard there which indicated Jefferson demanded that his slaves be well versed in the Scriptures. As the Monticello website indicates, slaves were allowed to practice Christianity but they also included some of the religious beliefs learned prior to conversion.
There is something unseemly watching two privileged white males stretch the truth to make the white founding fathers seem like they were benevolent and good slave owners. While Washington and Jefferson appear to be better than some other slave owners, and Washington perhaps better than Jefferson, neither of them compare to Robert Carter who freed all of his slaves beginning in 1791. But no matter how good Washington and Jefferson were, I cannot understand why it is important for Hibbs and Barton to stretch the truth to make the situation seem better than it was. In the process, Hibbs’ audience is less educated and less equipped to speak intelligently than before the program began. How does this help the church achieve anything?