At the Gateway Conference this past week, Mark Driscoll took the stage for the first time since he left Mars Hill Church. There he proclaimed that he was looking for some “wise counsel” even as he had avoided the wise counsel of his Mars Hill Church elders.
Another highlight of the conference was a prophetic word from Jimmy Evans about Driscoll. According to a tweet from conference attendee Ashley Greenwood, Evans proclaimed that Driscoll’s best days are ahead of him:

If you click the Instagram link in this tweet, you will come to a picture of Evans talking to a standing Driscoll in the front row of the crowd. According to Greenwood, Evans said:

You lead a great movement as a brother, you will lead a greater one as a father, your later years will surpass your younger. 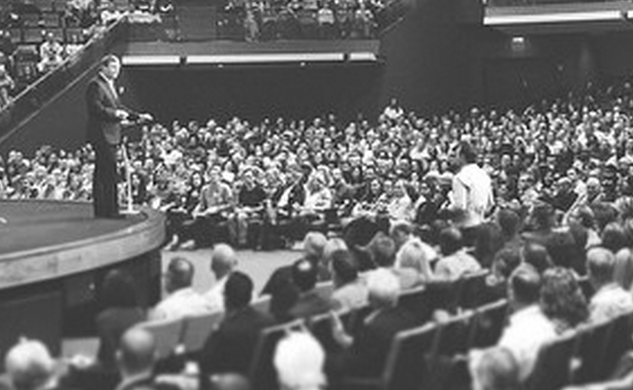 The nice thing about prophetic claims is that they can be checked. If Evans is referring to Mars Hill Church as “the great movement as a brother,” then the claim is debatable given that Driscoll left the church in disarray and about to fragment. If Evans meant Acts 29 Network, then it obvious that the claim is wildly inflated in light of the network’s removal of Mars Hill due to Driscoll’s actions. In light of the facts, one could easily predict that his later years will surpass his younger.
Any port in the storm I guess. The apostolic crowd appears eager to incorporate Driscoll into their tribe.