Yesterday on this post, a commenter left a provocative message that I decided to investigate. First the comment:

You should know- They’ve already determined what the outcome of the charges assessment will be. Mark will be out of the pulpit for a longer period of time than what has already taken place, and he will be placed on a restoration/spiritual care plan. He will be rebuked lightly and publicly, but he will not be disqualified.
One additional piece of information that was sad to hear- Mars Hill has sold MHC Sammamish. They haven’t told the congregation yet, but they have decided to sell and close that church in an effort to save Bellevue.

I haven’t found out much about the first claim but I did learn something about the second one. Mars Hill Sammamish is listed for sale.
Initially I emailed Sammamish pastor Alex Ghioni and asked if he could confirm or deny the sale of the building. He forwarded the email to Justin Dean who emailed today to say:

Pastor Alex forwarded me your email. I can confirm the Sammamish church has not been sold.

However, it is listed for sale: 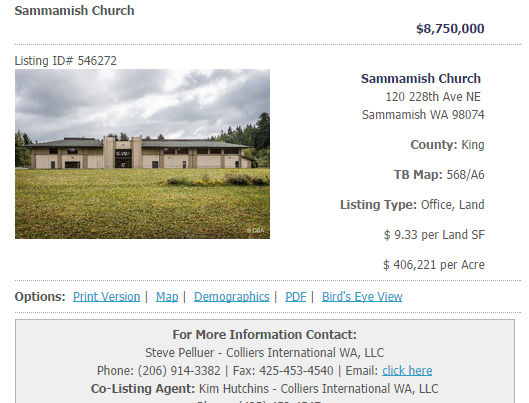 According to the listing (for more information on the building see this pdf), the current owner (Mars Hill) wants to continue to occupy the building for an unspecified length of time:

In contrast to the statement of Justin Dean, a source in the church told me the building was sold without the knowledge of the Sammamish congregation. The listing agent Steve Pelluer declined to confirm either story.  At present, the official position of Mars Hill Church is that the building has not been sold.
Mars Hill Sammamish used to belong to Evergreen Christian Fellowship. The first service as Mars Hill Sammamish was January 15, 2012.

UPDATE: After I emailed Alex Ghioni to ask about the sale of the Sammamish building, he disclosed to the congregation that other plans were in the works for the building (see his City post here). Thanks to an anonymous commenter for providing the information.