Craig Welch of the Seattle Times has an lengthy article on Mars Hill Church that provides a nice summary of the events since November, 2013. In his reporting, Welch got an interview with Matt Rogers, newly tapped chair of the Mars Hill Board of Advisors and Accountability. Even though Rogers and the BOAA passed off the investigation of Driscoll’s charges to the recently created Board of Elders, Rogers seems to know the facts about Driscoll. He told Welch:

“The hard part is that some of what’s out there is true, and he’s owned it and apologized for it and is trying to correct it, and some is not,” said Mars Hill Pastor Matt Rogers, who chairs the church accountability board examining accusations against their leader.

“If someone went through and dragged out every example of where I’d been short with my wife, or rude to a co-worker or done something stupid, and trickled that out week after week after week for months, you would have no respect for me, either.”

As I understand it, the investigation of charges against Mark Driscoll is just getting underway. However, I’m not sure I understand why the Board of Elders need to interview those picky elders, since Mr. Rogers already has the situation figured out. Seems like it would have been better public relations to at least seem like he was waiting on the results of the investigation to determine what is true and what is not.

The article I described above is on the Seattle Times front page today: 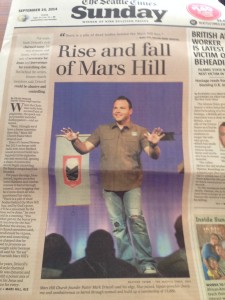