Of late, I have been covering the many goings on at Mars Hill Church. Since November 2013, I posted about plagiarism, ghostwriting, dreams of other people’s sins, mischief at Mars Hill Orange County, mischief involving Mars Hill Global, elders being fired and resigning, non-disclosure agreements, non-compete clauses, and several other issues. If that is normal, then give me abnormal. However, in the Jesus Made Mistakes sermon of May 4 (posted on the Mars Hill website on May 18), Mark Driscoll seemed to chalk everything up to a normal cycle, spirit empowered even. You can watch it here and read the transcript as well.

So I’ve been doing this eighteen years, and here’s what I see, and I want to share it with you to encourage you. If you’re a leader, I want you to see this. If you’re new to Christianity or new to our church, I want you to see this. There are normal rhythms and cycles that churches go through as people go through. Here’s the Spirit-empowered church cycle. We just looked at it in Acts 6. 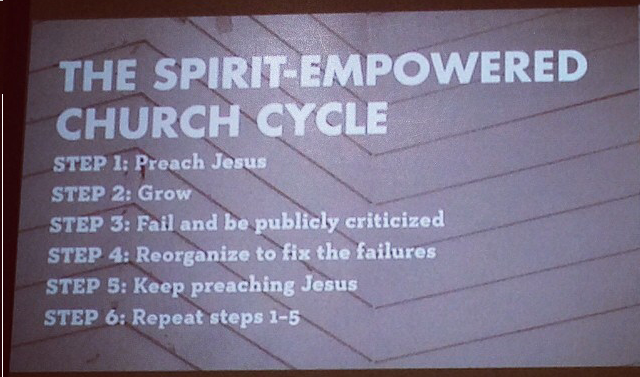 Here is Driscoll’s description of the cycle:

Number one, preach Jesus. First things first, preach Jesus. Christianity got started, Peter’s standing up, preach Jesus, preach Jesus, preach Jesus. He’s God become a man. He lived without sin. He died on the cross in our place for our sins. He rose from death. He conquers our enemies of Satan, sin, death, hell, and wrath. He ascended into heaven. He’s worshiped by angels. He’s coming again in glory to judge the living and the dead, and with him he will bring a kingdom that never ends. Everyone will get out of their grave. They’ll stand before him, they’ll give an account to him, and they’ll be judged by him for eternal life or death. It all comes down to Jesus, amen? Preach Jesus.

Number two, the church grows. The Holy Spirit who wrote the Scriptures blesses its preaching, wants people to know and love Jesus. People become Christians, the church grows.
Mars Hill, we’ve had some amazing surges of growth. It’s crazy. I mean, at this point in the book of Acts, the entire population of Christianity on the earth is around the same size as Mars Hill Church. So if you’re reading Acts and you’re like, “I can’t believe that God did that,” I can’t believe that God still does that, and he’s done it with us.

3. FAIL AND BE PUBLICLY CRITICIZED

4. REORGANIZE TO FIX THE FAILURES

But number four, reorganize to fix the failures. That’s what they did. This ain’t working. It used to work, but now it’s too big. Right, how many of you ladies—right now, you got two kids. You’re like, “I know how to raise kids.” What if you were pregnant with seventy-two children? You’re like, “I would need a different plan.” Yes you would. “I would need a bigger car, a bigger fridge, a better husband. I need a lot of things,” right?
As a family grows, it has to reorganize. And what used to work doesn’t work anymore because we got more kids and they’re getting older. So it is with the family of God. So what do you do? You reorganize to fix the failures. That’s what they did, that’s what we do by the grace of God.

Step five, keep preaching Jesus, keep talking about Jesus, keep pointing to Jesus, keep, in every way, maintaining Jesus as the center of everything.

And then step fix, repeat steps one through five.
Do you see that? Because what are they going to do? They’re going to fix their problems, the church is going to grow, and you know what? They’re going to have another problem, and then they’re going to have to fix it.
This is not just the cycle of church life, this is the cycle of your life, right? Meet Jesus, learn about Jesus, grow in Jesus, fail, have some people unhappy with you, repent of your sins, fix your mistakes by the grace of God, keep walking with Jesus, and grow some more until you fail again. Give grace to one another. Give grace to the whole church.
Mars Hill, this is normal, prototypical, historical, biblical Christianity, OK?

What is everybody all upset about? All of this stuff is just normal, biblical Christianity. “Mistakes were made” and need to be fixed. In fairness, Driscoll adds repentance to the description in step six, but the emphasis in the prior steps seems to be on mistakes as if the problems which have brought on public criticism to Mars Hill were just mistakes that require some tweaking to fix. And after all, even Jesus Made Mistakes.

I have it on good authority that attendance is down at Mars Hill and it is certain that popular elders have resigned or been dismissed. However, as they did in 2007, the executive elders may just see this as pruning. The dead wood leaves (or gets tossed under the bus) and you move on to the harvesting.
One hopes that this will not be Rev. Driscoll’s primary perspective in the upcoming mediation process.