On March 26, the Mars Hill Board of Advisors and Accountability referred to formal charges filed against lead preaching pastor Mark Driscoll in May 2013. According to the BOAA statement, the charges, which were filed by former pastor Dave Kraft, did not lead to Mark Driscoll’s disqualification. However, Kraft’s charges appear to have led to something else: a change in how formal charges may be filed.
In August 2013, new procedures were approved by the Board of Advisors and Accountability which made the process of bringing formal charges more difficult and actually eliminated the ability of former employees to file such charges if they failed to do so during their employment. 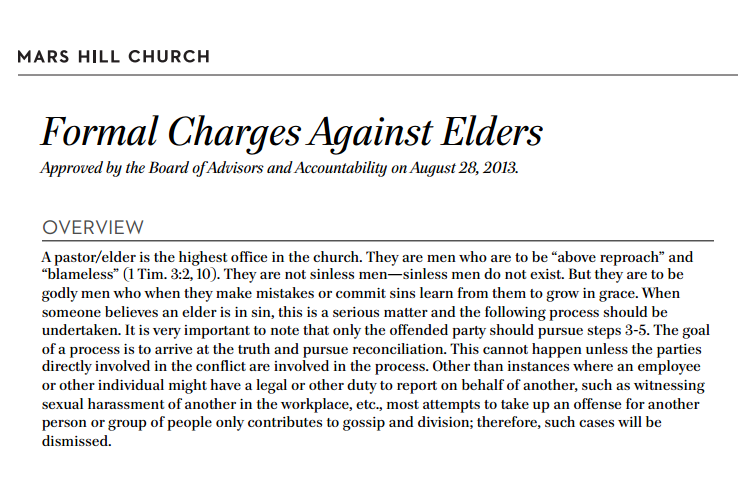 You can review the entire document here. I have mixed reactions to it. On one hand, I think it is right to protect people from false and frivolous allegations. On the other hand, this document places some powerful disincentives in the way of those who have legitimate concerns. My stance with this post is to provide the information and serve as a forum to discuss the role of formalized (some would argue extra-biblical) procedures in the megachurch environment.

One additional opinion I will express is that the success of this procedure will depend on the ability of the leaders to act in good faith and the willingness of the people to believe that the leaders will do so. For instance, this document requires that an accuser must submit a letter of resignation along with the complaint. If the allegation is found to be “groundless, sinful, or otherwise divisive,” the resignation could be actualized.

If the people trust that the leaders can distinguish between what is truly “divisive” and what is a legitimate problem brought with sincere intent, then people might be more likely to risk the many hurdles found in this process. If the people worry that any complaint will be viewed as “divisive” then legitimate concerns will smolder under the surface and likely lead to other problems. I’ll leave it to current and former Mars Hill members/leaders to decide what kind of climate exists there.