In January, I pointed out that a section of Real Marriage by Mark & Grace Driscoll seemed quite similar to a passage from Leland Ryken’s book Worldly Saints (as well as a couple of other sources). As it turns out, the publisher, Harper Collins Christian, has now corrected the section in question by quoting and footnoting the section of Ryken’s book I identified. Nearly all of the problems I identified have been addressed (although a couple of problems remain, see below) in the Google version of Real Marriage. See the earlier post for the details.

I have the entire section with before and after images side-by-side here. To illustrate, here is a short section from page 115 of Real Marriage (see this link for the entire two page section): 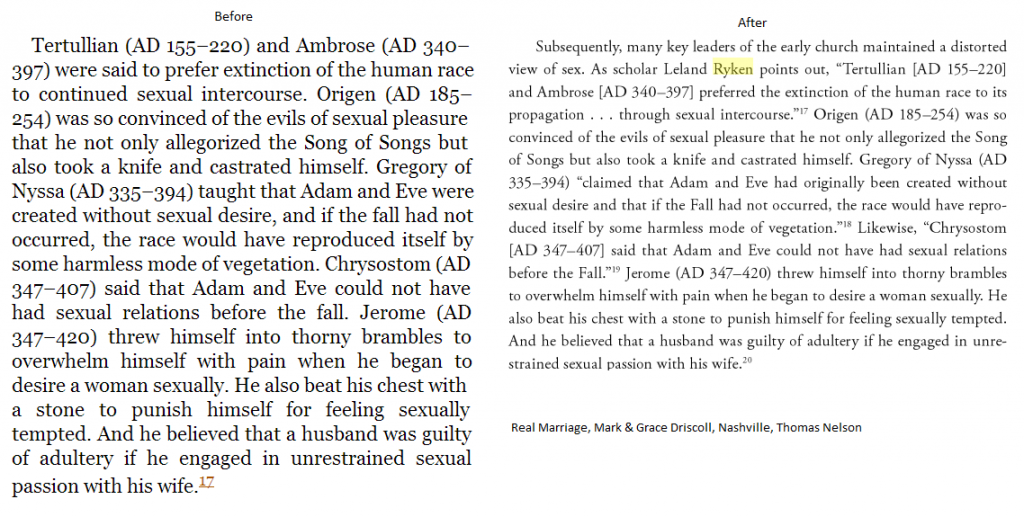 Unfortunately, the publisher did not correct the factual errors in this section. As I pointed out in my January post, it was probably Benedict who rolled in the thorns, not Jerome. The bigger problem is Driscoll’s misreading of the legend of Francis of Assisi. Driscoll’s version claims:

As I point out in another post, the legend of Francis and his snow family is an old one which, in the original, doesn’t sound like this R-rated version. Driscoll’s paraphrase departs significantly from his probable sources and from the original story. It is surprising that the publisher didn’t correct these factual problems along with adding the footnotes.

Harper Collins Christian continues to vindicate the allegations of plagiarism by quoting and footnoting the original sources. Tyndale, we’re looking at you now.