Late last week, Uganda’s president Yowari Museveni spoke out against the Anti-Homosexuality Bill but stopped short of declaring in his letter to Parliament what he planned to do about the bill.
According to a press release from the Robert F. Kennedy Center for Justice and Human Rights dated Jan. 18, Museveni will not sign what he termed as “fascist” legislation.

(18 January 2014 | Kampala) A delegation from the Robert F. Kennedy Center for Justice and Human Rights (RFK Center) met with President Yoweri Kaguta Museveni today at State House in Entebbe, Uganda to discuss the Anti-Homosexuality Bill passed by Uganda’s parliament on December 20, 2013. Last month Kerry Kennedy, President of the RFK Center, and Archbishop Desmond Tutu wrote to the President to express their concern over the bill, requesting further discussion on the matter.
The delegation – comprised of Ms. Kennedy, Santiago A. Canton, Director of RFK Partners for Human Rights, and Wade McMullen, Staff Attorney for the RFK Center – expressed their grave concern over the legislation that would further criminalize homosexual conduct, censor freedom of expression, and ban civil society organizations working on LGBTI issues in Uganda. Archbishop Desmond Tutu who joined the conversation via telephone similarly expressed his concern, stating the Anti-Homosexuality Bill was reminiscent of oppressive laws passed under apartheid in South Africa.
President Museveni pledged to reject the bill as currently drafted, calling the legislation “fascist.” The President stated that he will consult with his party and plans to introduce a new piece of legislation aimed at protecting minors from being coerced into sexual activity.

Today’s Daily Monitor brought this news to Ugandans. This is significant development in Uganda’s political landscape. Museveni will now suggest legislation which will actually address what many parliamentarians tout as their main concern — children. All LGB groups in Uganda oppose crimes against children.
Uganda’s Civil Society organization also spoke out against the bill, noting what the lack of quorum and notice on the order paper. 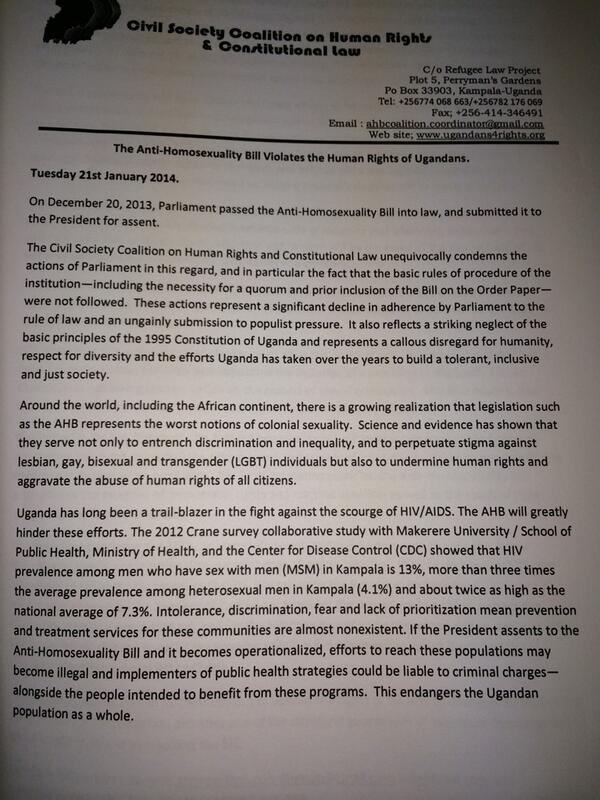