UPDATE – 1/14/14: This morning, I received an email from Charles Tuhaise, researcher for Uganda’s Parliament. Charles provided clarification about some of the issues I raised in this post. Thanks to him for the information. I am placing his comments in advance of yesterday’s post because they address some of my questions below. Regarding the manner of handling bills in Uganda, Tuhaise wrote:

Over here, the original Bill remains intact throughout the debate period until the Bill comes up for second reading. At second reading, usually on the same day, the entire Parliament constitutes itself into a “Committee of the whole House” and then effects amendments to the Bill clause-by-clause. After that, the Bill is “read” the third time and is passed by Parliament.
The rules of procedure do not provide for any other way of amending a Bill, after it is printed, other than the above procedure, when the Bill appears for 2nd reading in Parliament’s plenary sitting. That’s why the same copies of the AH Bill are provided whenever you request them. Even if it is a Private Member’s Bill, the Bill’s proponent cannot alter anything in the printed Bill, but must wait to propose such amendment at the Bill’s 2nd reading.
After a Bill is passed by Parliament with amendments, the Clerk’s office undertakes to produce the revised Bill that incorporates the amendments agreed by Parliament. This revised copy of the Bill is never availed to the public but is sent to the President for assent. If the President assents, it goes to the Printers and is next seen by the public as an Act of Parliament, (no-longer a Bill).
I hope this clarifies the issue of Bill amendment. The first time we know which amendments were agreed on in the Anti-Homosexuality Bill, is when it appears as an Act of Parliament (i.e. if the President signs it as passed). Alternatively, one can go to the House record of the debates (the Hansard) to see the amendments agreed when Parliament constituted itself as “Committee of the whole House” – (after the Hansard Department publishes the day’s proceedings – not sure if a copy is already available.)
But, Parliament’s Public Relations Department covered the day’s proceedings and wrote an article that indicates what was agreed on that day.

The article indicates that an act of homosexuality could lead to 14 years in jail with life in prison for repeated offenses. I have also been told that the 30 day period for Museveni’s assent (or not) does not begin until he gets the amended bill. If that is true, then his time for consideration may not have started since he may not yet have the amended bill. I asked Charles to clarify that point and will add that information when I get it.
……………. (Original posts begins below)
After the passage of Uganda’s Anti-Homosexuality Bill on December 20, all news coverage of that event claimed that the death penalty was removed from the bill.
On one other occasion prior to the adjournment of the 8th Parliament, the public was told that the death penalty had been removed. However, later, it was learned that the death penalty was in fact, still in place. And if the committee report that supported the enactment of the bill in December is the same report as offered in May 2011, then the death penalty could very well still be in the bill being considered now by Uganda’s president Yowari Museveni.
I have asked Parliament several times for a copy of the amended bill. Recently, when I asked Parliament’s media relations for a copy of the bill passed in December 2013, I received a copy of the bill tabled in June, 2011. In that bill, there are no changes from the original bill; the death penalty for aggravated homosexuality is still in place. 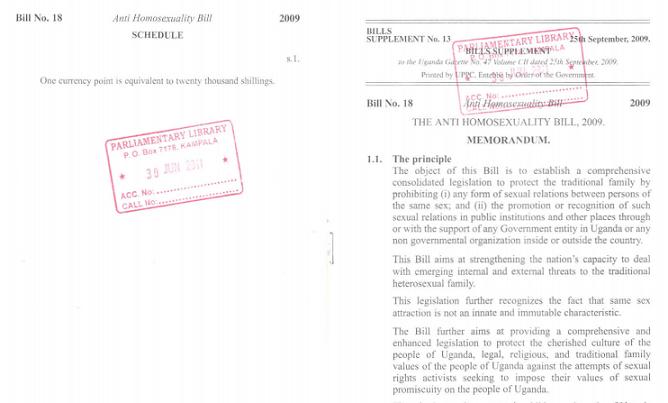 The date stamped on this bill is June 30, 2011 which was when the bill was tabled in the 9th Parliament. Click the link to read the bill sent to me and described as the bill passed by Parliament. The description of “aggravated homosexuality” is the same. 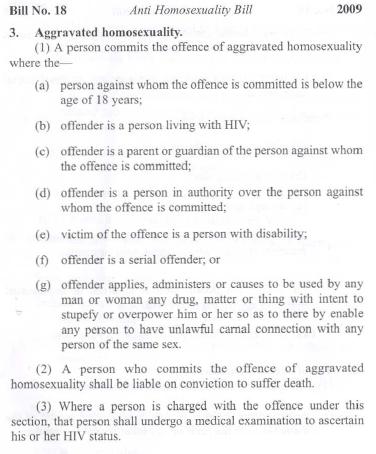 The death penalty is still in there (UPDATE: but as noted above, the death penalty is supposed to be removed. I still want to see the language myself due to the incident in 2011).
Now it may be that amendments were made and the bill as amended is being kept a secret. However, with the deadline looming for Museveni’s decision, it is worth asking what is actually in the bill. The world was told once upon a time that the death penalty was taken out and that other changes were made. However, the committee report in 2011 revealed otherwise.
Life in prison is bad enough and as this Cameroonian fellow proves, any time spent in prison could be a death sentence, so the removal, if true, is not reason for relief.
As I understand it, the bill becomes law if Museveni does nothing by next Monday (please see above — this may not be true). As of now, in my mind, there is still some doubt about what that law will look like.