After 40-50 protesters showed up in tiny Uvalda, GA this past weekend, the League of the South is making plans for a more ambitious protest in Murfreesboro, TN in October. 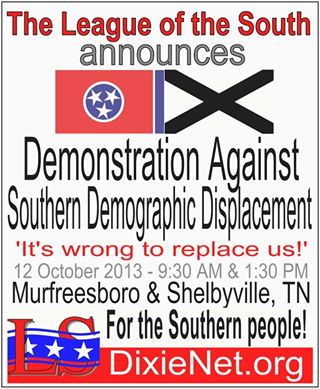 The League’s objective is to create a “resistance movement in the South working toward the goal of a free and independent Southern homeland.” The belief among League leaders is that the federal government is deliberately displacing white Southerners in order to wipe out resistance to federal power. The clunky slogan, “It’s wrong to replace us” represents this belief. League president Michael Hill said it this way:

Every people must have a homeland, and this is ours. Throughout history, men have challenged each other for territory. Just because we live in what is called the “modern” world does not mean that the forces of history have been rendered inoperable. If you think so, you have not noticed that a Reconquista is taking place before our very eyes. Millions of Hispanics, Mestizos really, are reclaiming land for themselves and their progeny. How is this different, say, from any other aggressive migration in history? That’s right—it isn’t, except perhaps for the fact that it is being encouraged by the government that claims control over the invaded lands. Washington, DC, is bringing in a new, more compliant population from the Third World to overwhelm and replace us.

Murfreesboro has been the scene of protests before largely focusing on the Muslim population. Protesters in the past have expressed their resistance to the influx of Muslims into the region with the associated building of mosques. Those protesters waved American and Israeli flags. According to Hunter Wallace, a white nationalist and League member, the protest in TN is not about preserving Israel or America:

Needless to say, the League won’t be singing “God Bless America,” or waving the US flag and Israeli flag in combination.

According to Wallace, the League is getting off the web and into the streets. Some might scoff at this and point out that any movement for secession which aims for a white homeland is a non-starter. However, as I keep pointing out, the League now has as a board member Michael Peroutka, who has been making significant headway in the mainstream evangelical world (e.g., National Religious Broadcasters and Liberty University).  According to Mr. Peroutka, his Constitution course is designed to help create sentiment favorable to Southern secession.  I wonder if it is working.