In the ongoing controversy over David Barton’s historical work, this is a significant development. First, let me present the components of the story.
In 2007, David Barton led a tour of the Capitol on behalf of the Family Research Council where he made several key claims. He used these claims to make dubious assertions about the intent of the founding fathers. FRC edited the tour video into an eight minute promo and uploaded it to You Tube. That video had over 4 million views. To fully understand the significance of this issue, you should watch that video which is still available on several You Tube accounts (another version is here on Vimeo):

Earlier this year, FRC made the video private after 34 Christian historians and social scientists asked FRC to remove the video from You Tube. FRC acknowledged the errors and Barton then made changes to the speech by introducing newly recorded audio clips into the old video. The new video has not been uploaded to the FRC account but was made available last week on Barton’s Wallbuilders You Tube account. Here it is:


Although new viewers of this video would not know it, there are several important changes to the original video.   The table below summarizes the alterations and remaining problems. 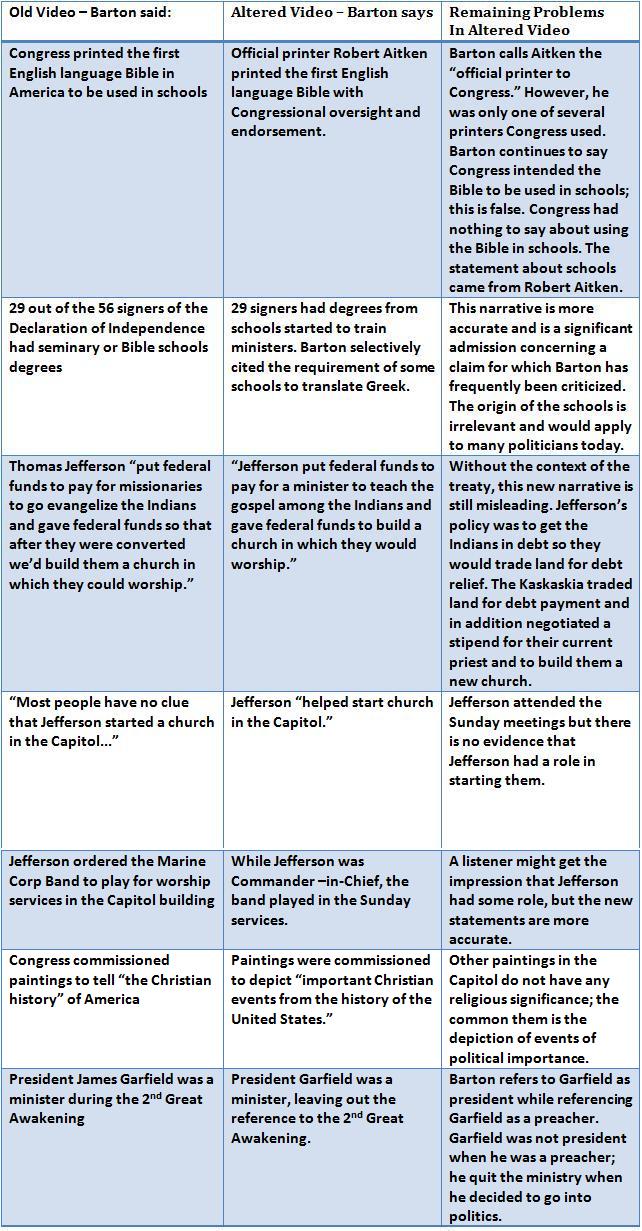 Clearly, Barton has changed his story on some key claims he has been making for years. However, he continues to defend erroneous conclusions even as he walks back on his prior stories. For instance, on the Aitken Bible story, he continues to take Aitken’s words about his Bible being a “neat edition of the Holy Scriptures for the use of schools” and make them come from Congress. He really wants that story to be about the Congressional policy on the Bible in schools when it has nothing to do with it. He continues to make the Bible a joint effort of Aitken and Congress when in fact, Aitken had nearly finished his project when he approached Congress in 1781. Prior to the 1781 petition to Congress, Aitken had already printed the New Testament and after his petition to Congress but before Congress answered him, Aitken offered the Bible for sale to the public.

As Barton begins to walk back some his claims, I am curious about who will inform all of the audiences he has misled. He has told countless churches and evangelical audiences that Congress printed the first Bible for the use of schools, and that 29 out of 56 signers had Bible school degrees, and so on. Will he take responsibility for informing these audiences of the errors? Will the Family Research Council do so?