Brain scans? We don’t need no stinking brain scans!
At least Jerry Mungadze doesn’t. Crayons and markers on a map of the brain tells him all he needs to know about personality and sexuality.
Last week, I posted about Mungadze’s appearance on the Joni Show telling Joni, Joe Dallas and David Kyle Foster that the brains of his patients go straight as the result of his approach. I wondered at the time how he could support that claim with brain assessment. It turns out that he fully filled in the audience of Foster’s Pure Passion on his methods. Hint: He doesn’t demonstrate how to read MRI results. The full version can be viewed on You Tube here and here. For a brief excerpt of part two, see below:


Note that patients color in a map of the brain and Mungadze reads the map like a projective test. Apparently, pink relates to femininity, red to anger/aggression, and so on. He says he can tell gay people apart from straights; and when they revert to heterosexuality, he can tell by how they color between the lines.
Who needs brain scans when you have crayons? 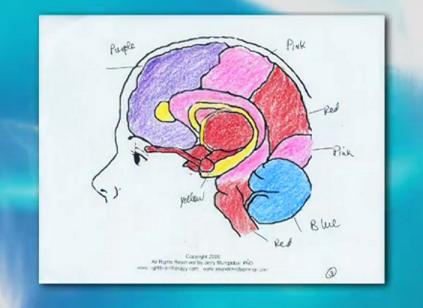 Mungadze’s is best known for his work in trauma and dissociative identity disorder (DID). His most famous patient is football star Herschel Walker, who wrote a book citing Mungadze’s help to overcome DID. Mungadze wrote the forward.
As for the theory of the brain revealing itself via colors chosen by patients, I know of nothing to support it. Projective tests in general are not reliable and this one in particular looks like a method invented by Mungadze without reference to research or validation.
The offer from Michael Bailey to send patients for real brain scans still stands. They can even bring crayons.