In September 2012, the tax exempt status of the National Association for the Research and Therapy of Homosexuality (NARTH) was revoked due to failure to file Form 990 for three consecutive years. The notice of revocation was yesterday according to the IRS website. 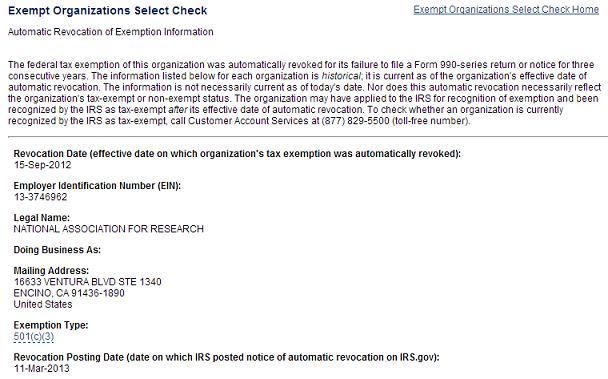 Even though the full name of the organization is not listed, the Employee Identification Number and address match up with the 2009 990 form. A call to the IRS also confirmed it.

NARTH’s website advises prospective donors that their donations will be tax deductible but it appears such deductions after September 15, 2012 may not be allowed.

It is difficult to know what this means. NARTH has never been a wealthy organization and conference attendance has declined in recent years. Members are hoping to maintain their ability to conduct reparative therapy with minors in CA via lawsuits against the state to overturn SB 1172 (see this article for more on SB 1172 and then NARTH’s perspective). NARTH has been actively soliciting donations to help support their legal actions. One would not be able to tell from the website that those donations are not deductible.

UPDATE (3/14/13) – I have heard from two commenters and other reliable sources that NARTH continues to tell those who inquire that donations are still deductible. However, according to an IRS representative I spoke with on Tuesday, their status is revoked and there has been no action from NARTH to attempt to reinstate that status. As is typical for NARTH, there has been no on-the-record comment on this situation, despite requests.