In the complaint filed by the Southern Poverty Law Center against Jews Offering New Alternatives for Healing (JONAH), there are strange allegations made by the plaintiffs.  One of the strangest is the following from page 16 of the SPLC complaint: 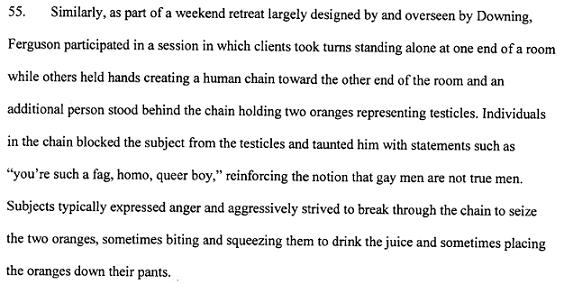 In this paragraph, Alan Downing is a life coach who works for JONAH and was until recently recommended by Richard Cohen’s International Healing Foundation. Ferguson is one of the plaintiffs represented by the Southern Poverty Law Center. While some defenders of reparative therapy might think the plaintiffs are making this stuff up, the allegations sound believable to me.

The scenario in the complaint sounds like a description of the “Getting His Balls Back” technique suggested in manuals used to guide the New Warriors Training Adventure as put on by the Mankind Project.  Over the years, JONAH and NARTH leaders have recommended the New Warriors Training Adventure as a means of building masculinity and reducing same-sex attraction so it is not surprising to see the same processes used in their efforts with clients.

The Balls Back process is described in this 2002 manual (p. 12) written for NWTA by Steve Kushner:

– He has given up or lost his power, masculinity or balls to someone and he wants it/them back

“Does he/she have your power, masculinity, balls?”

“Are you ready to take it/them back?”

“The time is now, the place is here!” (emphasis added)

And then in this 2005 “Guts Guide” (Warriors call these processes “guts work”) by Martin Lassoff, the process is described in more detail.

2. Getting His Balls Back

When the initiate feels he has lost his courage, power or maleness to someone and wants to get it back, this is referred to as Getting His Balls Back. This process includes a Gauntlet.

Position a man at the end of a Gauntlet holding oranges or tennis balls (symbolizing his balls). (emphasis added)

The Gauntlet is described in the SPLC complaint as a “human chain” which the client must break through in order to grasp the oranges. This achievement is supposed to symbolize the client getting his “balls back.”

A book by Steven Segell which includes a description of a New Warriors weekend also outlines the process: 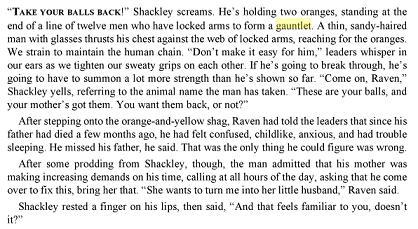 At 1:25 in this Colbert Report, Michael Ferguson described the technique for CNN (really you must watch the whole thing).

So it seems clear that the “oranges therapy” is derived from processes associated with the Mankind Project, an organization which Joseph Nicolosi, Arthur Goldberg, David Pickup and Richard Cohen have recommended.

Speaking of David Pickup, he told NBC News “I don’t do oranges therapy, and I don’t do naked therapy.” I established last week that as a New Warrior staff member, Pickup has recommended the New Warrior Training Adventure which involves nudity. Now today, I document that the very same “oranges therapy” Pickup said he didn’t do is also recommended by reparative therapists.