The purpose of David Barton’s Founders’ Bible is to make a case that the founders intended America to be a distinctly Christian nation. This is a multi-layered claim that has been taken up by many historians with many opinions. On this question, I recommend John Fea’s book Was America Founded as a Christian Nation: An Historical Introduction. I do not recommend the Founders’ Bible for reasons I have outlined here, here and here today. 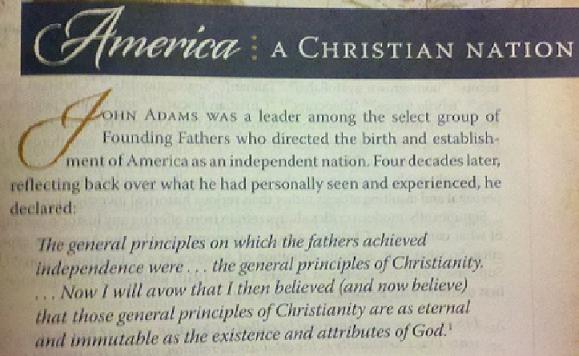 This quote is cobbled together from a letter Adams sent to Jefferson as a part of their retirement correspondence.  When Jefferson was Adams’ vice-president, there were great disputes about the direction of government and the men became leaders of opposing sides. After the bitter presidential race of 1800, the two men drifted apart. It was only later after Benjamin Rush played the intermediary that the two men began to explain their positions to each other. The quote in the Founders’ Bible is lifted without context from an exchange of letters which addressed some of those differences in philosophy. On June 15, 1813, Jefferson wrote to Adams about one of those divisions:

One of the questions, you know, on which our parties took different sides, was on the improvability of the human mind in science, in ethics, in government, &c. Those who advocated reformation of institutions, pari passu with the progress of science, maintained that no definite limits could be assigned to that progress [Jefferson’s party]. The enemies of reform [Adams’ party], on the other hand, denied improvement, and advocated steady adherence to the principles, practices and institutions of our fathers, which they represented as the consummation of wisdom, and acme of excellence, beyond which the human mind could never advance. Although in the passage of your answer alluded to, you expressly disclaim the wish to influence the freedom of inquiry, you predict that that will produce nothing more worthy of transmission to posterity than the principles, institutions and systems of education received from their ancestors. I do not consider this as your deliberate opinion. You possess, yourself, too much science, not to see how much is still ahead of you, unexplained and unexplored.

The passage Jefferson referred to is a letter that Adams wrote in reply to certain young men of Philadelphia in 1798. At that time, Adams had urged the men to hold to principles derived from their ancestors. Here is a particularly relevant portion:

Without wishing to damp the ardor of curiosity or influence the freedom of inquiry, I will hazard a prediction that, after the most industrious and impartial researches, the longest liver of you all will find no principles, institutions, or systems of education more fit in general to be transmitted to your posterity than those you have received from your ancestors.

The new nation was still looking for solid ground and faced with many challenges at home and abroad, citizens were staking out political territory. According to Jefferson, the parties disagreed about the nature of science and progress with Adams viewed as more of a traditionalist and Jefferson as the progressive. In the June 28, 1813 reply to Jefferson’s letter, Adams explained his position in more detail. Note the words in bold, these are the ones Barton selectively quoted in the Founders’ Bible. Speaking about the patriots who made up the revolution, Adams wrote:

Who composed that army of fine young fellows that was then before my eyes? There were among them Roman Catholics, English Episcopalians, Scotch and American Presbyterians, Methodists, Moravians, Anabaptists, German Lutherans, German Calvinists, Universalists, Arians, Priestleyans, Socinians, Independents, Congregationalists, Horse Protestants, and House Protestants, Deists and Atheists, and Protestants “qui ne croyent rien.” Very few, however, of several of these species; nevertheless, all educated in the general principles of Christianity, and the general principles of English and American liberty.

Barton obscures Adams’ meaning by failing to provide the context of the quote and by failing to provide the entire quote. Adams does not give sole credit for achieving independence to the “general principles of Christianity.” He also includes the “general principles of English and American liberty.” The general principles where all could agree would have to be a pretty small subset of principles given the long list of sects and denominations listed by Adams. Also note the religious skeptics (e.g., Bolingbroke, Hume, Voltaire and Rousseau)* in his list of philosophers.  The inclusion of these skeptics makes clear that Adams was looking beyond explicitly Christian influences and lauding some general set of principles which could be derived from both Christian and non-Christian sources.

Look again at the fuller quote from Adams. It would be easy to lift several portions of it to say that the nation was founded based on the American and English principles of liberty or on the list of people from Frederic of Prussia forward. Adams clearly saw many influences converging to provide support for independence, a fact obscured by the Founders’ Bible.

*For a tongue-in-cheek review of religion by Voltaire, click this link.