At the end of the month at Glenn Beck’s Restoring Love rally in Dallas, David Barton will sign his new book. While he may sign some copies of his other new book — The Jefferson Lies — the new book I am referring to is called The Founder’s Bible.  From 2:30-4:00pm on July 26, Barton will sign the Bible and then the next day at 9:00-10:00am Barton will give a speech about it.

There is very little information about The Founder’s Bible on the web. The website, Facebook, Twitter and You Tube pages are incomplete.  On the website, the pre-order shopping cart leads to Bronze Bow Publishing which publishes motivational tapes, self-help and fitness books.  Bronze Bow Publishing describes itself as ” a leader in helping men and women achieve their ultimate potential in functional athletic strength, fitness, natural muscular development, and all-around superb health and youthfulness.” They also say they sell Christian products to help Christians reach their “ultimate potential.”

John E. Peterson publishes many fitness books on Bronze Bow and appears to have some involvement in the Founders’ Bible. On a Bronze Bow forum for something called “transformetrics,” Peterson said in June.

My colleagues and I have been working night and day on ‘The Founders’ Bible’. Every one of you reading this will be amazed at the level of national press coverage and promotion this extraordinary Bible will receive.

The Founders’ Bible is published by Windblown Media (the same group that published The Shack) via a new imprint – Shiloh Road Press. Apparently Bronze Bow and Windblown have some connection. Consistent with the Restoring Love schedule, Peterson’s identified the release date for later July with a general release for August.

Here are some particulars. The Founders’ Bible contains the entire Bible text of the New American Standard Bible translation. In addition, it features more than 150 articles (averaging 4 pages each) by our Signature Historian David Barton covering everything from the founding of the first American colony in Jamestown, Virginia, on May 14 of 1607, forward to the present day. It deals with virtually every political hot button including Radical Islam’s current Jihad against America. The Founders’ Bible is scheduled for a very specific release the end of July 2012. And general release in August of 2012. Based on our early projections, our first 50,000 units will be sold within a very short span of time necessitating an immediate second printing.

Peterson then reproduced part of what appears to be an article to be included in the Bible.

With the above in mind I want to give each of you an idea of what The Founders’ Bible has to offer. For that reason I have printed Part 1 of an article titled, “America a Christian Nation’ below:

John Adams was a leader among the select group of Founding Fathers who directed the birth and establishment of America as an independent nation. Four decades afterwards, reflecting back over what he had personally seen and experienced, he declared:

Subsequent generations routinely reaffirmed what Adams had declared, including South Carolina governor James Hammond, who in 1844 publicly described America as a Christian nation. Following that pronouncement, a small group openly censured him and demanded an apology. Shocked by that reaction, Hammond responded:

“Unhappily for myself, I am not a professor of religion – nor am I attached by education or habit to any particular denomination – nor do I feel myself to be a fit and proper defender of the Christian faith. But I must say that up to this time, I have always thought it a settled matter that I lived in a Christian land and that I was the temporary chief magistrate of a Christian people! That in such a country and among such a people I should be publicly called to an account, reprimanded, and required to make amends for acknowledging Jesus Christ as the Redeemer of the world, I would not have believed possible if it had not come to pass.”

Across four centuries of American history, there have been literally thousands of declarations about America being a Christian nation. Yet today, few offenses will subject an individual to greater public derision than repeating what John Adams, James Hammond, and hundreds of other American leaders said. In fact, even a passing suggestion that America is or ever was a Christian nation makes apoplectic the post-modern elites in media, education, law, and politics.

There is more but I am saving it for another post.

There are several problems with this short quote, but the most disturbing to me is the use of James Hammond as an advocate of America as a Christian nation. James Henry Hammond was a racist and proud of it. As a Congressman and Senator from pre-Civil War South Carolina and then governor of that state, Hammond became a leading defender of slavery as a moral good. Hammond was one of a tiny minority of Representatives who voted against ending the slave trade in the District of Columbia. On February 1, 1836, Hammond spoke at length in defense of the slave trade in D.C. From the Congressional Globe, here is just one representative paragraph: 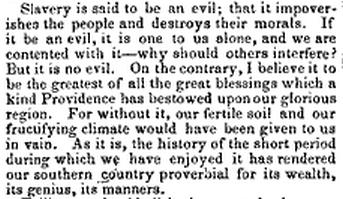 Hammond was a major proponent of the mudsill theory, i.e., the view that inferior races should serve superior races. On March 4, 1858, Hammond gave a speech on the Senate floor outlining his views. Here is a portion of it:

In all social systems there must be a class to do the menial duties, to perform the drudgery of life. That is, a class requiring but a low order of intellect and but little skill. Its requisites are vigor, docility, fidelity. Such a class you must have, or you would not have that other class which leads progress, civilization, and refinement. It constitutes the very mud-sill of society and of political government; and you might as well attempt to build a house in the air, as to build either the one or the other, except on this mud-sill. Fortunately for the South, she found a race adapted to that purpose to her hand. A race inferior to her own, but eminently qualified in temper, in vigor, in docility, in capacity to stand the climate, to answer all her purposes. We use them for our purpose, and call them slaves. We found them slaves by the common “consent of mankind,” which, according to Cicero, “lex naturae est.” The highest proof of what is Nature’s law. We are old-fashioned at the South yet; slave is a word discarded now by “ears polite;” I will not characterize that class at the North by that term; but you have it; it is there; it is everywhere; it is eternal.

The Senator from New York said yesterday that the whole world had abolished slavery. Aye, the name, but not the thing; all the powers of the earth cannot abolish that. God only can do it when he repeals the fiat, “the poor ye always have with you;” for the man who lives by daily labor, and scarcely lives at that, and who has to put out his labor in the market, and take the best he can get for it; in short, your whole hireling class of manual laborers and “operatives,” as you call them, are essentially slaves. The difference between us is, that our slaves are hired for life and well compensated; there is no starvation, no begging, no want of employment among our people, and not too much employment either. Yours are hired by the day, not cared for, and scantily compensated, which may be proved in the most painful manner, at any hour in any street in any of your large towns. Why, you meet more beggars in one day, in any single street of the city of New York, than you would meet in a lifetime in the whole South. We do not think that whites should be slaves either by law or necessity. Our slaves are black, of another and inferior race. The status in which we have placed them is an elevation. They are elevated from the condition in which God first created them, by being made our slaves. None of that race on the whole face of the globe can be compared with the slaves of the South. They are happy, content, unaspiring, and utterly incapable, from intellectual weakness, ever to give us any trouble by their aspirations. Yours are white, of your own race; you are brothers of one blood. They are your equals in natural endowment of intellect, and they feel galled by their degradation. Our slaves do not vote. We give them no political power. Yours do vote, and, being the majority, they are the depositories of all your political power. If they knew the tremendous secret, that the ballot-box is stronger than “an army with banners,” and could combine, where would you be? Your society would be reconstructed, your government overthrown, your property divided, not as they have mistakenly attempted to initiate such proceedings by meeting in parks, with arms in their hands, but by the quiet process of the ballot-box. You have been making war upon us to our very hearthstones. How would you like for us to send lecturers and agitators North, to teach these people this, to aid in combining, and to lead them?

It is impossible therefore to suppose that slavery is contrary to the Will of God. It is equally absurd to say that American slavery differs in form or principle from that of the chosen People. We accept the Bible terms as the definition of our slavery and its precepts as the guide of our conduct. We desire nothing more. Even the right to buffet which is esteemed so shocking finds its express license in the Gospel (1 Peter ii 20). Nay what is more, God directs the Hebrews to bore holes in the ears of their brothers to mark them when under certain circumstances they become perpetual slaves (Ex. Xxi: 6). I think then I may safely conclude and I firmly believe that American slavery is not only not a sin but especially commanded by God through Moses and approved by Christ through His Apostles. And here I might close its defence for what God ordains and Christ sanctifies should surely command the respect and toleration of Man. But I fear there has grown up in our time a Transcendental Religion which is throwing even Transcendental Philosophy into the shade a Religion too pure and elevated for the Bible which seeks to erect among men a higher standard of Morals than the Almighty has revealed or our Saviour preached and which is probably destined to do more to impede the extension of God’s Kingdom on earth than all the Infidels who have ever lived.*

Readers, what should Windblown Media do about this?

There is lot wrong with the rest of the excerpt from the Founders’ Bible which I will take up in subsequent posts.