While examining NARTH’s 2009 review of past studies on homosexuality  (Journal of Human Sexuality, Vol.1 – click the link for the entire issue), I ran across this citation:

Nicolosi (in press) found that while conducting reparative therapy, a 50-year-old male client reported a sudden and dramatic freedom from unwanted homosexual thoughts, feelings, and behaviors after taking Lexapro. The client reported that he continued to be free of these unwanted symptoms more than 18 months after starting the anti-depressant medicine.

To better examine these claims, I asked one of the authors of the NARTH paper, James Phelan, for access to the source. Thanks to Dr. Phelan for supplying the paper for review.

The paper by Joseph Nicolosi was apparently submitted for publication in 2009 to a journal but there is no record of it being published anywhere. As noted, it describes the case of a 50 year old man who was diagnosed by Nicolosi with ego-dystonic homosexuality. The patient was seen for 142 sessions over “about eight years” with no progress. During therapy, the patient described “generalized hopelessness and helplessness, along with a pervasive sense of inadequacy…” He also described himself as “a non-entity.”

After the lengthy unsuccessful treatment for unwanted same-sex attraction and depression, the patient began taking “a 5 ml dosage of Lexapro,” a selective serotonin reuptake inhibitor. According to Nicolosi, the patient had “an almost immediate decrease in his sense of worthlessness and inadequacy, followed soon after the elimination of his homosexuality.”

The paper describes the situation:

After awhile, the patient stopped taking the drug because he was feeling so much better. However, this brief drug holiday did not work out well. 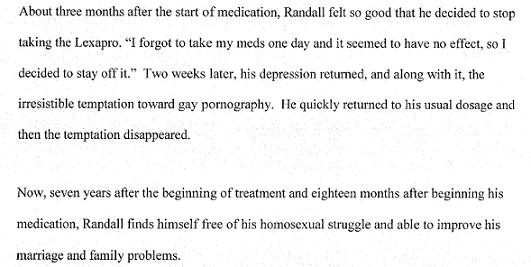 However, there is more to the story.

I wrote to Dr. Nicolosi and asked permission to post the entire paper. He wrote back quickly to clarify that the claim made in the NARTH paper is not longer valid. Nicolosi explained,

So another one of the papers referred to in NARTH’s landscape review can be set aside as evidence for sexual reorientation.

Even in Nicolosi’s paper, there was evidence that the medication effect was an anomaly. Nicolosi wrote: 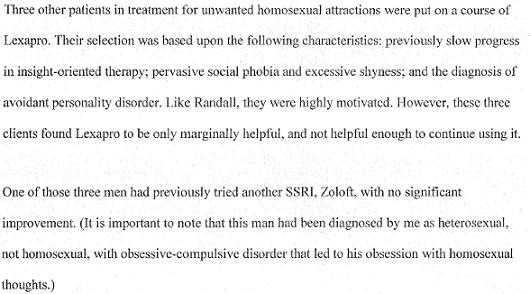 However, these cases were not mentioned in the NARTH review. Instead of noting that the case reported was only one success out of four tries, the authors only noted the one case which appeared to be a success at the time. Now, according to Dr. Nicolosi, Lexapro has not lived up to that claim.

This report can be added to others where significant questions have been raised  (e.g., the Bieber study, the Kaye study, the work of Masters and Johnson, the Pattison and Pattison research).