A spate of articles and news releases have appeared recently purporting to demonstrate that the life expectancy of homosexuals is in the neighborhood of 20 years lower than that of straights. Behind this flurry of activity is Paul and Kirk Cameron of the Family Research Institute and a poster session presented at the March, 2007 Eastern Psychological Association convention in Philadelphia.

The first news release was titled “1.4% of Adults Homosexual?” This release carried a link to a paper ostensibly presented at the Eastern Psychological Association, titled, Federal Distortion Of Homosexual Footprint (Ignoring Early Gay Death?). However, according to the letter below from the president of the EPA, Dr. Phil Hineline, the title and intent of the paper referenced by the news release is different than what the Camerons told the EPA they would do.

Following the first news release, others followed from the Camerons proposing that a reason fewer people over age 60 identify as homosexuals is because they are not alive (see them here, here, here, here, here and here). Again saying these data were presented at the EPA convention, the Camerons based their assertions on data from Denmark and Norway. On April 3, I received an email from Paul Cameron with “gays die too young to permit them to adopt” in the subject line. The email contain a Rocky Mountain News article quoting Cameron and an April 2 news release he said he gave to the Colorado legislative committee titled, “Gays Disruptive, Die Sooner & Their Kids Complain.” It was addressed to over 40 news outlets and bloggers, with this message: “How about an interview?”

These claims have never made sense to me, and I wrote briefly about this several months ago. So I dove into this a little further. In the mean time, Jim Burroway, over at Box Turtle Bulletin examined the Camerons’ work with an analysis of the study and a letter about the study from Dr. Paul Hineline, EPA president.

I also wrote to Dr. Hineline with questions about the Camerons’ study and to ask permission to include a response here. Here is the letter (which is identical to the one posted at Box Turtle Bulletin).

In response to your query, the following is a statement suitable for public distribution, provided that quotations from it are not lifted out of context.

Paul Cameron and Kirk Cameron have posted for circulation a controversial and lengthy manuscript that purports, via the tagline at the bottom each page, to be the account of a presentation at the March 2007 meeting of the Eastern Psychological Association. The title of that manuscript, as well as its main emphasis, focuses upon an issue that was not present in the title nor was it in the supporting materials that were submitted by the Camerons for a poster presentation at EPA.

The submitted title, which appears in the EPA printed program, is: “Federal distortion of homosexual footprint.” The accompanying Abstract asserts that the proportion of the Canadian population identified as lesbian, gay and bisexual is substantially lowered if adults over age 60 are included than if they are excluded from the sample. The asserted implication is that federal agencies are exaggerating the size of the homosexual proportion of the population by excluding adults over 60 from the assessments.

In contrast, the manuscript at issue carries the title: “Federal Distortion Of Homosexual Footprint (Ignoring early Gay Death?).” Two of the three paragraphs in its accompanying Abstract focus upon the topic of the added parenthetical phrase, which is an inference — indeed a topic — that was not present in the materials submitted to EPA. Irrespective of its potential for controversy, it is highly unlikely that the augmented/altered version would have been accepted for presentation, for there clearly are many reasons other than differential longevity that could result in the under-reporting of homosexuals over 60.

Whatever its content, even the format of the manuscript to which the EPA identification has been affixed — a manuscript of more than 7000 words plus three tables and six graphs, would have been completely inappropriate as a poster presentation, which was the venue in which Dr. Cameron proposed to participate in the meeting.

To clarify the relevant history and circumstances: After putting out the call for submissions to be proposed for the EPA meeting, we typically receive over 700 submissions as was the case this year. These submissions are divided into categories (e.g. Animal Learning, Social psychology, etc ..) and each section is reviewed by a volunteer on the program committee. As each submission typically has at least two authors, vetting authors against other organizations’ lists of people with problematic ethical records is simply an impossibility, especially given the time-frame of preparations for an annual convention.

For acceptance, a work had to be complete, be methodologically sound using proper data collection techniques and/or experimental methods, the

conclusions had to be derivable from the presented results, and the topic deemed to be one that could stimulate interest and discussion among those attending the meeting.

The submission by Dr. Cameron indicated that there was a possibility that the prevalence of homosexuals in the population had been overestimated by previous techniques. Data were presented, reportedly using a broader defined sample than that used by government agencies, which indicated that the prevalence of homosexuality in the population was smaller than had been previously suggested. The submission by Dr. Cameron was for a poster presentation, and it was accepted as a poster, not as a paper or address. Whatever the Camerons ultimately presented, occurred in an hour-long “poster session” among approximately 70 posters.

There was nothing in the materials submitted by the author for review by EPA that indicated that the work could, or would, be informative with respect to the longevity of homosexuals.

I provided Dr. Cameron with the letter from Dr. Hineline and asked for an on-the-record response to it. The following email is Dr. Cameron’s reply:

Iâ€™m not surprised â€“ not even annoyed — that Dr. Hineline has made an issue of the fact that we covered more ground in our poster than we promised in our abstract. In making this point, he implies that the rules for the presentation of posters at the EPA are as rigidly codified and enforced as procedures in a criminal trial. Such is by no means the case.

As you know, posters are probably the most informal way our profession has devised to present new information at a convention. You put up the poster and you hope people will stop and ask you questions about your research or request a copy of the findings you are presenting.

At a recent meeting, one scholar attached the word SEX to the top of his poster. When asked why did it, he smiled and said, â€œJust to catch peopleâ€™s attention.â€ Did he seek permission from the EPA to include that Attention Grabber in his poster presentation?

Surely Dr. Hineline knows that, over the years, numerous posters have contained information not included in the abstract. So is he implying that if the organization had known what the Canadian, Norwegian, and Danish reports told us about the gay lifespan, the EPA would have rejected the proposed poster? I hope not. If so, then the EPA has sacrificed scientific inquiry to political correctness. If not, then what is Dr. Hinelineâ€™s point in bringing up this matter?

Besides, what he says about the presentation is in error. He writes that there was: â€œnothing in the materials submitted by the author for review by EPA that indicated that the work could, or would, be informative with respect to the longevity of homosexuals.â€ Inspection of Table 1 and the four-page abstract itself would challenge that assertion. 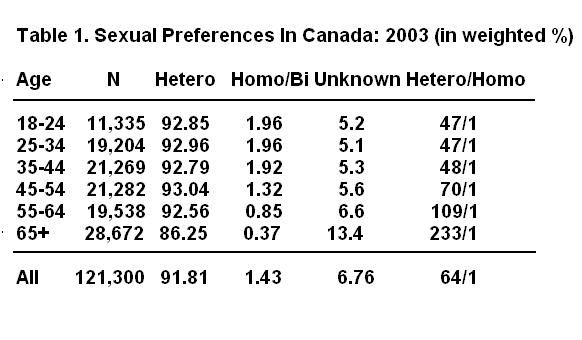 In the Canadian database, a decline in homosexuality was evident by the fourth decade of life. Those who identified themselves as homosexual constituted a relatively stable fraction of adults only for those aged into their mid-40s (e.g., one of every 47-48 adults). Thereafter, their proportion dropped regularly, down to one of every 234 adults in old age (65+), resulting in an overall estimate of 1.4% of adults who â€˜were

As you can see, in both the table and the abstract, we note the precipitous decline in the homosexual population following middle age. Indeed, failure to consider the reason for this decline would have constituted negligence on our part.

We extrapolated the figures on the gay lifespan after we had submitted the abstract; and since they came from Census Bureaus as the Canadian statistics, we thought they deserved inclusion. I think this incident illustrates the sad truth that if you publish research that is inconvenient to the gay rights movement, you encounter more obstacles than those whose work supports gay claims.

Given the number of typos in Dr. Hinelineâ€™s email, I wonder if it was not written in haste and hence without the reflection necessary to state his case clearly and accurately. Perhaps he has read the misleading information about me that the American Psychological Association distributes and has assumed them to be a reliable indicator of my skill and diligence as a scholar. If such is the case, I understand his attitude. Few professionals â€“ whether doctors, lawyers, or psychologists — like to question the integrity of their national organization. Yet all of these groups have become battlegrounds for proponents of various political agendas.

My initial interest in this topic is as always, to provide the best information to those with sexual identity conflicts. Another interest I have is to examine the accuracy of this study and the claims made based on the study. To do that, I am reviewing the study and I have asked others to do so. I hope to have an analysis of the claims of shortened life spans soon. For now, I will leave it to readers to digest and comment on the public presentation of these claims by the Camerons, the response of the EPA president and the rebuttal by Paul Cameron.

NOTE: View all posts on this topic here: Cameron discussions.