Writing in the second edition of NARTH’s (National Association for the Research and Therapy of Homosexuality) Journal of Human Sexuality, Neil Whitehead proposed a reanalysis (NARTH summary here) of a paper by Ariel Shidlo and Michael Shroeder on potentially harmful outcomes of sexual orientation change efforts. NARTH’s headline describing the paper is 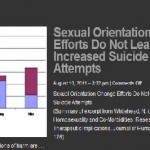 Contrast NARTH’s headline with the title of my post. After examining  Whitehead’s  article, I submit that his analysis supports my title as much or more than it does NARTH’s claim.
Shidlo and Shroeder wrote the following about suicide attempts in their 2002 report:

In his NARTH paper, Whitehead makes a series of assumptions about the participants in the Shidlo and Schroeder study. I think these are questionable assumptions but for sake of discussion, I will play along. First, he assumes that these suicide attempts occur over a span of 25 years (13 years pre-therapy, two years in therapy and then 10 years post-therapy). He then assumes that the attempts occurred at a constant rate over that span to calculate an expected number of suicide before, during and after therapy. Whitehead then compares his expected attempts with the actual number of attempts as reported by Shidlo and Schroeder. Whitehead summarized his findings as follows:

(a) Comparing pre-therapy, therapy, and post-therapy groups, there is overall no significant increase in suicides per unit time.
(b) There is a very clear increase in attempts during therapy.
(c) There is a trend to fewer attempts after therapy.

Suicide attempts reported before therapy were 25, and those reported during and after therapy combined numbered 34. The expected numbers allowing for the time periods and normalized to the above total are 30.55 and 28.44. The expectation on which this is calculated is that therapy has no effect, either positive or negative.

In this analysis, no difference shows up in suicides related to therapy when suicide attempts before therapy are compared with the time period during and after therapy. However, Whitehead does not stop there. About suicide attempts during therapy, he wrote:

For attempts before and during therapy, the observed results are 25 and 23, and the calculated expected normalized figures are 42.18 and 5.82. These are very different from the observed, and the chi-square test produces a result of p < 0.001. They are not the same, and therapy has therefore been associated with a several-fold increase in attempts.

In other words, there is a very large increase in suicide attempts during therapy. The title of my post is accurate. According to this NARTH report, sexual orientation change “therapy has therefore been associated with a several-fold increase in attempts.”
However, Whitehead is still not finished. He compares his expected suicide attempts during and after therapy with Shidlo and Shroeder’s data and observes a trend in the direction of therapy being helpful.

The observed results of attempts before and after therapy are 25 and 11, and the calculated expected normalized results are 19.68 and 16.30. The result of the calculation is p = 0.075. A statistical result < 0.1 and > 0.05 is usually called a “trend,” in this case to fewer attempts after therapy. However, further inspection of the data shows that this result was quite sensitive to sample size. If only one extra person with no suicide attempts after therapy had been added to the sample, the result would have attained the usual p = 0.05 level of significance, and the conclusion would have been that therapy was associated with a significant diminution of attempts.

Many a researcher has wished for that elusive extra subject which, if only the subject had performed as hoped, would lead to a statistically significant result. Whitehead really wants to find that sexual reorientation therapy does not lead to increased post-therapy suicide attempts  and so he predicts that one more subject responding the way he expects would lead to that significant result.
Leaving aside the fact that there is no statistically significant result, NARTH and Whitehead fail to consider another possible explanation for the concocted results. Perhaps, the reason why suicide attempts fell after change therapy is that the clients involved got out of the therapy. Maybe these people found peace with their sexuality in some other way that did not involve trying to change. From this point of view, perhaps people are alive today despite the therapy not because of it.
Whitehead then tries to explain why therapy is associated with such a significant increase in suicide attempts.

Whitehead claims that this increase in suicide attempts during change therapy is actually “a predicted pattern,” explaining that people are more likely to attempt suicide just after they begin therapy. However, this is misleading. The citations Whitehead offers as support for his claim (Erlangsen, Zarit, Tu, & Conwell, 2006; Qin & Nordentoft, 2005; Qin et al., 2006) describe results with elderly patients admitted to psychiatric hospitals. In other words, Whitehead compares suicide attempt rates for people trying to change sexual orientation in out-patient psychotherapy with rates for elderly psychiatric patients admitted to the hospital. Is this a valid generalization?
In my view, the generalization is faulty. Most, if not all, sexual orientation change therapy is provided on an outpatient basis. A better comparison would be to other out-patient treatments. Researchers Bostwick and Pankrantz reported in 2002 (cited in Rudd, et al, 2009):

Mortality is greater for in-patients than for out-patients, as one would expect. On the whole, risk of suicidality is related to severity of mental health condition, with more disabling disorders (schizophrenia, bipolar, major depression) accounting for more suicide attempts. Change therapy clients may or may not have a disabling mental disorder. If they sought therapy to change orientation, the comparison to those seeking treatment for a major mental disorder is questionable.
If, for discussion’s sake, we look at any reference group to discern the role of therapy in suicide attempts, we find that some studies demonstrate a reduced risk of suicide after initiating outpatient psychotherapy. This chart from a study led by Katalin Szanto in 2003 shows that suicide risk decreases gradually but surely from the week just prior to the beginning of therapy (baseline). 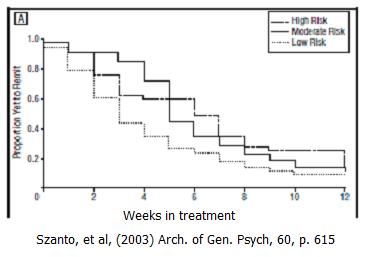 Other studies using cognitive-behavioral and dialectic behavior therapy have demonstrated that therapy can reduce suicide risk during therapy. (e.g., work by Marsha Linehan, see reference list).
To summarize, patients admitted to the hospital with more severe diagnoses demonstrate more suicide attempts early in treatment. However, it is questionable that sexual reorientation efforts can be compared to in-patients admissions. In addition, it seems that some therapy approaches reduce risk of suicide. Presumably, therapy fiting the needs of the clients would demonstrate better risk reduction.
Whitehead set out to tell us that sexual orientation change efforts do not lead to more suicide attempts. However, playing by Whitehead’s rules, the only statistically significant finding is that such attempts increase during such therapy.
Having written many words to demonstrate that Whitehead actually the opposite of what the NARTH website claims, I must return us to reality. For reasons I have written about before, one cannot make any conclusive statements about reorientation and suicide risk from Shidlo and Schroeder’s data. In December 2008, NARTH’s president at the time Julie Hamilton made the claim the Shidlo and Schroeder study showed a reduction of suicide risk associated with sexual reorientation change efforts. At that time, I critiqued the misuse of  the study, writing that the study was not set up to examine risk of suicide.
NARTH claims to be a scientific organization. However, since 2008, NARTH has been using a study to claim something not possible to claim by virtue of the study design or the reanalysis by Whitehead. Make no mistake about it, the claim that sexual orientation change efforts do not increase suicide attempts is not based on science but on advocacy.
Click the link for the list of references.
The entire issue of the Journal of Human Sexuality is here.