In news you might not see elsewhere…
President Obama’s Aunt, the Rev. Margaret Obama from Kenya, graduated recently from the Unificationist Theological Seminary according to a statement on the church’s website. 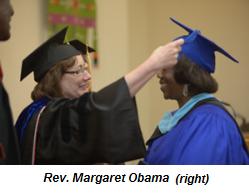 Friends, family and fellow students enthusiastically applauded as twenty-two students received their diplomas at the 35th commencement ceremony of the Unification Theological Seminary (UTS) at its New York City campus on Thursday, May 19, 2011. The 15 students receiving their Masters in Religious Education included Rev. Margaret Obama from Kaisumu, Kenya, U.S. President Barack Obama’s aunt, who wrote her thesis on “Religious Education to Support Orphaned Teen Girls in Kenya: a Curriculum.” Rev. Obama has told friends that she will spend the coming year doing pastoral care in service to her local church, the Church of the Incarnation, in Jersey City, New Jersey.

“I learned so many good things at UTS,” Rev. Obama told Familyfed.org. “Many churches concentrate on taking care of their own, but the Unification community focuses upon serving those outside their own group,” she said. “They [the Unificationists] cherish family values, making husbands, wives and children the priorities, and I believe that by promoting family values, they are building world peace, because peace in the family easily extends to the larger world,” she told familyfed.org in a telephone interview. Rev. Obama says that she became involved with Unificationists after attending seminars of the Women’s Federation for World Peace in Kenya in 2005.

The Church of the Incarnation is an Episcopal church. The Unification church describes itself as follows from the website:

The Unification Church is comprised of families striving to embody the ideal of true love and to establish a world of peace and unity among all peoples, races, and religions as envisioned by Rev. Sun Myung Moon. Members of the Unification Church accept and follow Reverend Moon’s particular religious teaching, the Divine Principle.

Unificationists believe that Rev. and Mrs. Moon are the true manifestations of the masculine and feminine elements of God.
After the election of the President, high level Unificationist touted meetings between Moon (True Father) and Obama, and even said Michelle Obama was involved in their movement. One follower claimed this on a Unificationist website:

Rev. Yang came on the second last day and explained about Father’s life, concluding with some exciting new information. The newly elected United States’ president, Barack Obama, has been attending ACLC conferences and has apparently met with Father on several occasions. Even just before the elections, he attended a prayer breakfast. His wife is involved with our movement as well. This is a new revolution, now that Obama has become president; Father wants to eradicate all barriers between races.

I should add that there is no confirmation that any of those claims are true. Unificationists are keen on political connections and once used the Dirksen Senate building as the site of the coronation of the Moons as the King and Queen of Peace. They then use these real and implied connections as means to paint a skewed narrative to the faithful. I suspect the graduation of Ms. Obama will be added to the narrative of the Obama’s as supporters of the Moon’s place as True Parents.