Alice Dreger, writing at the Psychology Today blog, has an important post addressing the title above. Presenting data from Ray Blanchard, she says that the answer to the question is: no, gay men don’t have more sexual interest in children than straight men do. This is an important data set from Blanchard which I am sure will be good news to some and trouble those who want to stigmatize gays.

First a summary from Dr. Dreger:

So, at the outset, let me give away the answer to my headline question: Do gay men have more sexual interest in children than straight men do? No. And we have lab studies to prove it.

In fact, the British Journal of Psychiatry published a major study backing up the “no” answer almost 40 years ago. The distinguished sex researcher Kurt Freund and his colleagues used a laboratory method (described below) that demonstrated that the sexual responses of gay men to boys were similar to the responses of straight men to girls. (Both responses are relatively low.) This past June in Canada, at the major international research conference on sexual orientation science, sex researcher Ray Blanchard (who was trained under Freund) presented substantial new data confirming and expanding on Freund’s findings.

Although the sampling of men in the study raises some concerns, the research is quite relevant to the question about sexual interest. As Dreger notes, the sample is not representative of all men so the numbers of pedophiles are probably inflated compared to the total sample. Given that these are men suspected of a crime or seeking help, one might expect the non-clinical population to test more in keeping with their categorical orientation than this group.

Blanchard’s findings are represented well by this graph: 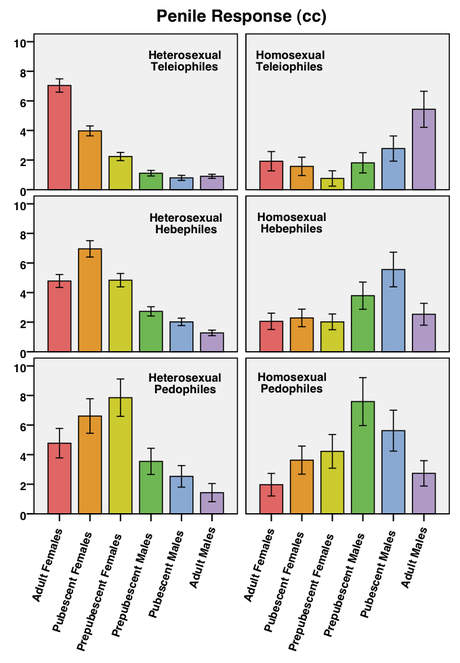 This figure shows the mean (average) response of each group to each stimulus category. So that statistically inclined readers can make some comparisons besides those I will explicitly discuss, I have included the 95% confidence interval for each mean. These are represented by the vertical lines bracketing the top of each bar. Two means are significantly different if their confidence intervals do not overlap. The converse, however, is not true, and the significance of the difference between means with overlapping confidence intervals must be tested with methods other than visual inspection.

The key comparisons produced results similar to those of Freund et al. They show that gay men (homosexual teleiophiles) and straight men (heterosexual teleiophiles) have similar penile responses to depictions of children in the laboratory,” that is to say, relatively low. But more important than their being relatively low, they’re not really any different for gay and straight men.

Dreger concludes: “So it doesn’t look like gay men are any more likely than straight men to be attracted to pubescent children.” Assuming (which seems safe to me) that non-clinical, representative sampling would produce at least the same if not more stable categories, I think Dreger and Blanchard have solid evidence for their conclusion.