Tabloids fighting the war on gays is a growth industry in Uganda. I am aware of the Red Pepper, Rolling Stone and the Onion. Now comes a Makerere University publication called the Campus Nail. Published by the same printing house that printed the Rolling Stone (Blue Magic Inc), the Campus Nail has another so-called expose of recruitment on the Makerere University campus. With a big picture of Martin Ssempa and the headline “Homosexuals Recruit 1000 Makerere Students,” the full page article follows the same type of writing found in the Rolling Stone. Click the image to read the article. Thanks to Thomas Muyunga for the image. 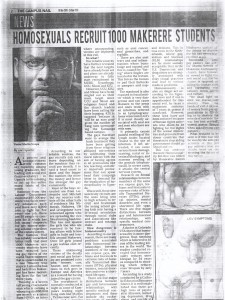 When you click the image, you will read about alleged efforts of a person called “Timothy” to recruit unnamed students into homosexuality.

According to this story, gays are mad and so are getting back by recruiting and sending graduates into the high schools to recruit some more.

The article quotes “a doctor in Colorado USA” that says that homosexuality is more dangerous than smoking. Paul Cameron’s name is not used but his “studies” are cited to demonstrate that homosexuality cuts 24 years off one’s life. Recently, David Bahati told Canadian radio a similar statistic. I guess we know where the Ugandans are getting their information.

Martin Ssempa, thought by some observers to be mellowing, makes an appearance and gets his anti-gay on in a big way, saying that “The war has just started.” Ssempa, a member of the Oral Roberts University Board of Reference, is representing the university in Uganda as a “renowned anti-gay pastor.” Perhaps that could be listed under his name on the ORU website.