Update: According to the BBC, a Ugandan judge has ordered the Rolling Stone to stop outing gays.

Giles Muhame, editor of the two-month-old Rolling Stone paper, told the AFP news agency that he would defy the ban.

“We will publish more pictures but in a diplomatic way, so that we can dodge the law,” he said.

On his Facebook page, editor Giles Muhame said this about the court ruling:

I have heard on grapevine that Kampala high court today afternoon issued an injunction barring the mighty Rolling Stone from publishing information that could lead to the identification of homosexuals…..the newspaper has already achieved its objective….By the way this means we can write about homosexuality but not …identify them….ok, understood…we are law abiding citizens….

I have obtained some screen shots of the Rolling Stone which continues the “hang the gays” campaign in Uganda. I am going to publish them first and then add commentary through the morning. Some cannot be published without heavy editing since they include pictures and names. 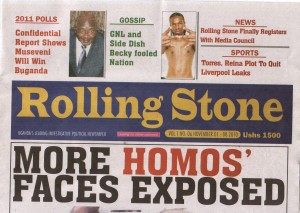 Click the next image to read an interview done by Oral Roberts University Board of Reference member, Martin Ssempa, with a young girl he continues to promote as an ex-lesbian. Ssempa told his former benefactor Canyon Ridge Christian Church that he disapproved of the “hang the gays” campaign but now he appears in the Rolling Stone again. I asked Rolling Stone editor Giles Muhame about his pastor’s (Ssempa) stated diapproval of the first “hang the gays” issue, and he did declined to answer. He did however, say that Ssempa had given them an interview. Two credible sources in Uganda have told me that both Giles Muhame and Cliff Abenaitwe attend Ssempa’s Makerere Community Church. 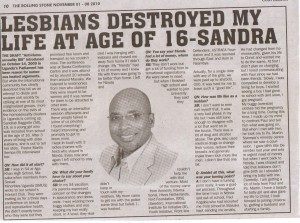 The next image is a lead article which looks like it could come from the Family Research Institute. In fact, the article titled, “More Homos Faces Exposed” quotes Paul Cameron’s lifespan articles. It also cites a “reliable source” saying that the stalled Anti-Homosexuality Bill will be passed when Uganda becomes an oil producer. 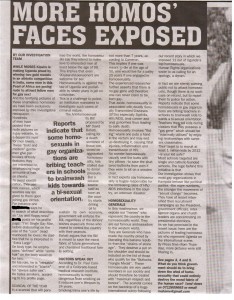 Human rights groups in Uganda are trying to limit or halt the paper’s activities. Today or tomorrow a Uganda court is expected to hear an application for the paper to cease publishing. Managing editor Cliff  Abenaitwe told me in an email that he expects to prevail, saying

As regards the pending court case, its an application by a human rights group requesting court to order this People’s favourite political news paper from publishing more pictures of homosexuals in Uganda but as i stated above it is an application but court is yet to decide. nevertheless, its a matter of time till court decides in our favour because there is nothing wrong with what we are writing. 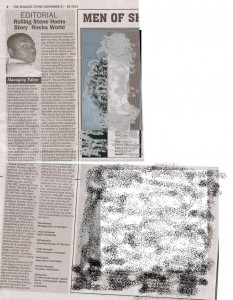 Click the image above to read Managing Editor Giles Muhame’s defense for this outing campaign. I have blocked out most of the pictures and descriptions of the men outed here. The remainder of the images I have are similar to these.