Not usually my source for news, but this clip of Jeff Sharlet on Democracy Now is interesting in that he says David Bahati is ready to move the Anti-Homosexuality Bill along. Specifically at 32:43, Sharlet says:

What I’m hearing from David Bahati, the author of the bill, with whom I am still in touch, is that he’s now being promised a second reading, and this new step in the press is a very alarming one because it shows that its moving back to the forefront of Ugandan society.

The at 33:00, after the statement about the current status of the bill, Sharlet mentions the connection between Martin Ssempa and Canyon Ridge Christian Church, which, as Sharlet points out, I have documented repeatedly.

There is much more in the interview, some of it pretty controversial stuff, but I want to make two quick points. One is that the outing campaign could be a means to reignite the bill, as Sharlet suggests. The bill has not been withdrawn, and if Bahati is correct, he may get his second reading.

The second point is that I think Jeff is generally correct about the membership of Canyon Ridge. I think if church members had a true picture of what the Anti-Homosexuality Bill really contained, they would be horrified. However, the leadership of the church has not posted the bill in favor of edited documents which obscure it’s plain language.

And I continue to wonder why the Human Rights Campaign of Las Vegas, who met with Canyon Ridge leaders over a month ago, have said nothing about a church in their community which indirectly supports a bill which is terrorizing GLBT people in Uganda.

UPDATE: Jim Burroway reported this last week but I neglected to add this piece of information to any of my posts: The Uganda tabloid Rolling Stone has been halted by the government, at least temporarily. Apparently the paper did not meet all regulations necessary.  Click the image to read it… 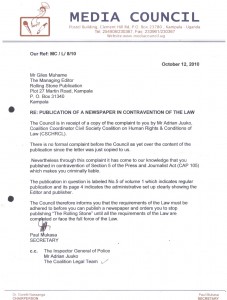