Sunday morning, a small group of teens stood outside Canyon Ridge Christian Church in Las Vegas and protested that church’s support for Uganda’s Anti-Homosexuality Bill. I reported about this event last night on Salon.com.

Chase Cates and Spencer Niemetz are listed as the organizers of the event on this Facebook event page. According to Chase, 17 students came out altogether with about 10 at any one time. The protesters ranged in age from 15-19 and represented a variety of views, backgrounds and orientations. The focus of their concern was that a local church was supporting one of the chief instigators of the Anti-Homosexuality Bill. They wanted to raise awareness since there has been very notice of the situation around Las Vegas. 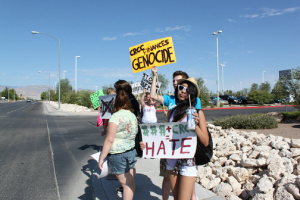 After the second service, some of the church leaders invited the teens in for a meeting. Some of them, including Cates, took them up on their offer.

According to Cates, the leaders dodged some of their questions, including how much support the church sent to Martin Ssempa and what criteria would be used to determine support. Pastor Mitch Harrison confirmed to me that the meeting occured although he did not say whether or not he acknowledged that the Anti-Homosexuality Bill addressed adult consensual behavior. Cates seemed to think they understood, but Harrison did not confirm this. Here is an excerpt from the Salon piece on that point:

Cates said he wanted to raise awareness about the Anti-Homosexuality Bill and said that “if this bill was passed and people were executed or criminalized in any way, Canyon Ridge Christian Church in turn would be held responsible for financing Ssempa who so overtly pushed the bill.”

Cates, a Las Vegas man who will enter college in the fall, said the reaction from the church members was mostly positive. “After the second service, CRCC invited us to join members of the church to have an open discussion of the issue. We took them up on their offer and ended up having a two-hour conversation with Pastor [Mitch] Harrison and others,” he said.

According to Harrison, “nine or so” protesters came into the church for the discussion. Harrison said the teens raised “concerns about the bill criminalizing homosexual behavior.” He added, “Our goal in meeting with them wasn’t so much to express our opinions but to listen to their concerns and gain understanding.”

I hope understanding was gained because the recent response on the CRCC website demonstrates a lack of it when it comes to the AHB. Cates told me that he was not finished with the issue and there may be more awareness raising to come.