Dr. Joseph Nicolosi often tells his audiences that, in essence, homosexuality in males derives from lack of bonding with the father. In this YouTube video, he describes several factors which he believes could be important in the development of male homosexuality, including a masculine, sports-minded older brother, peer rejection and sexual abuse. However, referring to these hypothetical factors, Nicolosi says

I advise fathers, ‘if you don’t hug your sons, some other man will.’

Thus, fathering is the lynchpin of the reparative theory of male homosexuality. Most older studies of parenting examining sexual orientation find modest differences between gay and straight groups. However, there is often much overlap between the two groups, meaning that many gay males recall warm, accepting relationships with their fathers and many straights recall distant, unaccepting fathers.

Given that detachment from the father is theorized to occur before age 5, the potent experience is difficult to test directly. Researchers try to get at this indirectly via surveys of how gay males recall the relationship with the father. A finding that gay males and straight males recalled their fathers similarly would be evidence against the theory.

Thus, I was surprised recently to find a review of a Finnish study of sexual orientation, parental relationships and gender atypical behavior reviewed on the NARTH (National Association for Research and Therapy of Homosexuality) website. Reviewed by Robert Vazzo, the study also provides evidence which addresses NARTH’s view of homosexuality and pathology. I summarized this report last year when it came out, but I want to provide another look in light of Vazzo’s review. First, the abstract (after the break):

The study investigated 3 hypotheses. They were:

The researchers found (with statistics removed):

Hypothesis 1. Results related to childhood GAB were relatively clear-cut. There was a significant difference between gender atypical and typical participants on both coldness and over-control dimensions describing parenting. In each instance, participants who reported childhood GAB described the parenting practices of their fathers and mothers in more negative terms. 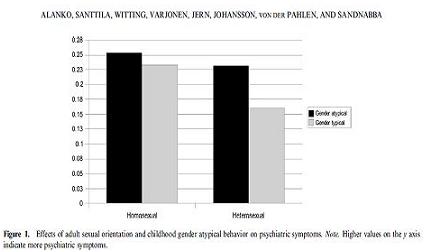 How does Mr. Vazzo describe the results? Mostly, he summarizes the report accurately. He even points out that gay males described warmer relationships with their fathers than straight males. Given that a cardinal doctrine of reparative drive theory is that gay males had poor bonding with their fathers, this should be more than surprising. It is a disconfirming finding to the prime theory promoted by the organization.

Gay males described a scenario where they had warm relationships with both mother and father. Mother was described as somewhat more controlling but in “a loving way.” Without the distant, non-affirming father sending the scared pre-reparative boy to mother’s apron strings, this finding is a problem for the reparative theory and the hugging advice (don’t get me wrong, you should hug your sons for reasons unrelated to their sexuality).

Also in Vazzo’s review, there is some speculation which I believe is unwarranted. For instance, he says about the second hypothesis:

Results of the study also confirmed the authors’ second hypothesis. The data showed that participants’ negative descriptions about their mothers’ overcontrolling behavior was related to a homosexual orientation. Homosexually oriented men and women in the study reported their mothers as more overcontrolling than did heterosexual participants. Surprisingly, however, heterosexual men described their fathers and mothers as slightly colder than did the homosexual men. On the contrary, lesbian women described both their fathers and mothers as colder than the heterosexual women did. These results support the popular belief that homosexual women and men have had serious relational problems with their parents. (emphasis mine)

Lesbian women describe a emotionally colder parenting environment as compared to straight women. However, nothing in these results supports Vazzo’s characterization of “serious relational problems” for homosexual women or men. To be consistent, if these results signify “serious relationship problems,” then Vazzo would have to assume straights have them too.

Mothers might try to over-control the openly gender atypical behavior of their offspring, as reflected by their over-controlling parenting style. It is interesting to note that lesbian women seem to have the least affectionate relationship with their parents, maybe reflecting a certain degree of autonomy and distance from the parents of the tomboyish girl. Clearly, however, differences in the way parents handle children that seem to be associated with their future sexual orientation exist. Special features of these children, possibly of the same origin as their adult sexual orientation, may influence the style of parenting.

It was also found that negative parenting, irrespective of any interactions with other variables, was significantly related to symptoms of depression and anxiety in the participants, confirming our second hypothesis. This means that parenting, overall, is important for the mental health of the offspring, and that this effect was found irrespective of any effects of childhood.

Much of the rest of Vazzo’s article is a summary of the results of the Alanko et al study. However, Vazzo does not stop there. Out of left field, he says:

A more complete and plausible explanation from both a psychodynamic and family systems perspective is that the children’s gender atypical behavior is a defense mechanism designed to protect them from the anxiety that they experience as the result of difficulties in the parental relationship.

There is no evidence given for the defense mechanism hypothesis about GAB. There are parental difficulties reported but these may be a function of the GAB and not the cause. Nothing in the study renders the defense mechanism theory more plausible or complete. A more comprehensive view would be that GAB could be either a cause of parenting problems or the result of them with different outcomes arising from different situations. Alanko et al quote a 1990 Bradley and Zucker suggesting that in “extreme cases” of GAB, the behavior might be in reaction to parental incompetence and stress and indeed that could be true at the extremes. However, this study does not offer a direct test of that hypothesis.

Even with these criticisms of Vazzo’s summary, I commend him for placing this research in front of NARTH readers for at least two reasons. One, this study undermines reparative drive theory, although one would need to be relatively familiar with the theory to know it. Other studies which do this have not appeared there. Two, the study undermines NARTH’s focus on homosexual orientation per se as pathology. On the relationship between pathology and orientation, Alanko et al say:

In summary, the findings suggest that gender atypicality in childhood is related to later distress both among hetero- and homosexual individuals. It therefore seems that the elevated level of psychological distress among homosexual individuals reported in several studies is to some extent caused by their generally higher levels of childhood GAB as opposed to a homosexual orientation per se. In fact, heterosexual participants who reported childhood GAB also suffered from elevated levels of psychological distress to the same extent as the homosexual participants. Support for parents in the process of accepting a gender nonconforming child, who might or might not become homosexual, is especially important when considering the results of this study.

Whereas NARTH and many conservatives assume that the elevated levels of distress found among homosexuals is due solely to their same-sex attractions and associated behavior, this study finds evidence that GAB, admittedly more prevalent among gays, may be one underlying culprit. GAB in both straights and gays associates with psychological distress (see the bar graphs). The source of distress for gender typical gays is not so clear and may relate to issues related to negative experiences with parents. This research adds to a growing body of evidence that suggests one factor contributing to the elevated psychological distress of GLB people is related to stress of growing in a gender atypical manner.