In the latest issue (Spring, 2010, issue 137) of the Southern Poverty Law Center’s Intelligence Report, the organization lists active hate groups and hate websites. These are groups which engage in campaigns of personal vilification against other social groups. The list of organizations deemed to be anti-gay hate groups are listed on the SPLC website.

There is another list of “hate websites” only listed in the print copy of the Intelligence Report. Here is the description of those websites given on page 51.

The assumption here is that some websites are not really organizations of substance but fronts for one or a handful of people who stigmatize a group of people.

The website listing for anti-gay groups looks like the hate group with an exception — Americans for Truth about Homosexuality, this year listed as a hate website. 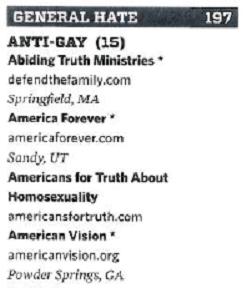 The listings might be controversial to some, and have no impact other than to provide information to the public. The SPLC monitors the activities of groups on the lists but has no other authority. While the criteria are not completely clear, it is important to note that the SPLC does not list groups because they oppose gay rights or view homosexuality as a sin. Note the many groups which are not listed.

UPDATE: Mr. LaBarbera does not like being listed as a hate group and has stopped harassing me to respond to the SPLC.

LaBarbera also provided cover for the supporters of the Uganda Anti-Homosexuality Bill while admitting that he had not even read it. LaBarbera also has numerous supportive references to Scott Lively, including this one where Lively defends his rhetoric in Uganda. Recall that Lively told the Ugandan people that the Rwandan holocaust was likely driven by homosexuals. On the rhetoric of Scott Lively in Uganda, watch this video for footage.