In an op-ed dated today but available online over the weekend, the Washington Times assails Obama safe-schools appointee, Kevin Jennings for his handling of a 15-year old student’s sexual revelations when Jennings was a young teacher.

According to Mr. Jennings’ own description in a new audiotape discovered by Fox News, the 15-year-old boy met the “older man” in a “bus station bathroom” and was taken to the older man’s home that night.

FOX News has also reported on this and pointed to that recording. That audiotape was recorded by someone who attended a speech Jennings gave in Iowa in 2000 and then given to me. The relevant clip is here. You can read more about Brewster and the controversy in the article, Remembering Brewster and in this prior post on the topic.

There is another wrinkle to this story. It appears that Brewster had a name change in 2006 for Jennings book, Mama’s Boy, Preacher’s Son: A Memoir. Below, I have excerpted the passages in the book where he discusses a boy named Robertson, who has issues like Brewster. The first two selections are from pages 161-162. Jennings, a young teacher at Concord School, answers the boy’s concerns in the same way as he answered Brewster. 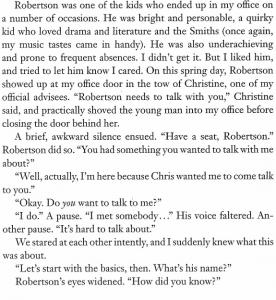 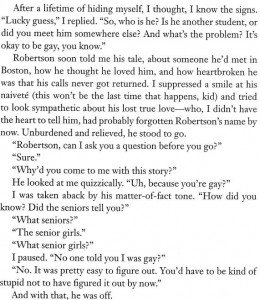 This section below from page 169, corresponds to the Iowa speech, where Jennings refers to Brewster as being 45 minutes away from Concord in Boston. 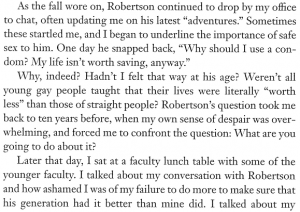 Now, here are the excerpts about Brewster from One Teacher in Ten. They certainly sound like the same boy.

I remember Brewster, a sophomore boy who I came to know in 1987, my first year of teaching at Concord Academy, in Concord, Massachusetts. Brewster was a charming but troubled kid. His grades didn’t match up with his potential, his attendance could be irregular, and he often seemed a little out of it. He was clearly using some substance regularly, and was not very happy with himself. But I didn’t have a clue as to why—at least not at first.

I had come to Concord from Moses Brown in search of a place where I could be more open about who I was. I wore a ring that symbolized my commitment to my partner, and students like Brewster started asking me what it meant. Confused, I went to the head to ask how I should respond. “Tell them it’s a gift from someone you love,” he said.

Incredulous, I replied, “Do you say your wedding ring is a ‘gift from someone you love’?” I answered Brewster’s question about my ring honestly. To my surprise, he and the other students who asked didn’t turn away from me, unlike my peers who had turned away from Mr. Korn in 1978. They didn’t seem to care much at all about my being gay.

Toward the end of my first year, during the spring of 1988, Brewster appeared in my office in the tow of one of my advisees, a wonderful young woman to whom I had been “out” for a long time. “Brewster has something he needs to talk with you about,” she intoned ominously. Brewster squirmed at the prospect of telling, and we sat silently for a short while. On a hunch, I suddenly asked “What’s his name?” Brewster’s eyes widened briefly, and then out spilled a story about his involvement with an older man he had met in Boston. I listened, sympathized, and offered advice. He left my office with a smile on his face that I would see every time I saw him on the campus for the next two years, until he graduated.

Several items in these stories do not line up easily. In the first story, Robertson knows Jennings is gay because everybody knows it. In the second, Brewster asks about Jennings’ ring. In the first story, he seems surprised to know that most students knew he was gay, while in the second, he described being out to one of his advisees “for a long time.” What is confusing to me is why he changed the name given his use of Brewster in his first book and speeches.

Also, in his most recent book, he includes reference to the aspect of the story which he referred to in the 2000 speech – Brewster/Robertson’s trip(s) to Boston. Here is the excerpt from the 2000 speech:

And I said, “Brewster, what are you doing in there asleep?” And he said, “Well, I’m tired.” And I said, “Well we all are tired and we all got to school today.” And he said, “Well I was out late last night.” And I said, “What were you doing out late on a school night.” And he said, “Well, I was in Boston…” Boston was about 45 minutes from Concord. So I said, “What were you doing in Boston on a school night Brewster?” He got very quiet, and he finally looked at me and said, “Well I met someone in the bus station bathroom and I went home with him.” High school sophomore, 15 years old. That was the only way he knew how to meet gay people. I was a closeted gay teacher, 24 years old, didn’t know what to say. Knew I should say something quickly so I finally said, “My best friend had just died of AIDS the week before.” I looked at Brewster and said, “You know, I hope you knew to use a condom.” He said to me something I will never forget, He said “Why should I, my life isn’t worth saving anyway.”

Note that in his newest book, Mama’s Boy, Preacher’s Son: A Memoir, Jennings adds description of Brewster/Robertson’s trips to Boston and calls them “adventures.” He notes his references to safe sex but does not address nagging issues that persist. In Remembering Brewster, I note that officials at Concord School regarded these actions as violations of their policies.

In neither story does Mr. Jennings mention any efforts to alert parents, school officials or the authorities. In the Nixon Peabody letter, he said he did not have a reason to report these events. This is difficult to understand given the statute in Massachusetts mandating the report of sexual activity between an adult and child under 18 at that time. When presented with the transcript of the Brewster scenario as recorded at the lecture in Iowa, Tara Bradley, Director of Communication at Concord Academy said that such actions on the part of a student should be reported by a teacher to school administration. Concerning the Brewster story, she added: “The Dean of Students and the Head of School are mandated reporters who have to file a 51A with DSS [Department of Social Services] in a situation such as this.”

Nowhere does Mr. Jennings say he told anyone at the Concord Academy. According to Ms. Bradley, current school policy would make Brewster’s actions a violation of the rules. Asked about Concord’s policy concerning Boarding School residents, she said, “Our current policy forbids students traveling to Boston or Cambridge unsupervised and without permission from the Dean of Students or Administrator on duty.” According to both accounts, Mr. Jennings knew the student was in Boston unsupervised and informed no one.

Readers will have to decide for themselves what to infer from these passages. I believe these events should have at least triggered a report to the school administrators and appropriate interventions made. What is currently troubling is the fact that Jennings and his supporters have not addressed the discrepancies and the concerns which derive from the accounts. An acknowledgement of the events with a recognition that teachers should not conduct themselves in this manner would be helpful.  I will end this post as I did a related post on this topic:

I may be misunderstood with this post. Let me be clear: the sexual orientation of the teacher and/or the student are not relevant to the need to get the parents, school and possibly the authorities involved in helping a troubled student in the situation Jennings described. Also, I am not disputing that GLSEN has appropriately raised awareness about bullying of GLB students; a problem which needs ongoing attention. However, I do wish the point person for school safety was someone with an unambiguous record on school-parent communication. If Mr. Jennings had said something like – ‘hey, that was a rookie mistake, I should have alerted someone about a depressed 15 year old boy being 45 minutes away from his boarding school without permission having sex, perhaps with an adult,’ then I would not have quite the same reaction. Instead, he denied what he earlier acknowledged and threatened to sue.

UPDATE: There are other references to this student elsewhere.

Here, Jennings is interviewed by QSaltLake.com for an article dated 9/08/08. In none of these accounts is there a mention of referral for mental health services or to the school counselor.

During his third year at Concord Academy a suicidal gay student made Jennings’ drive to help gay students all the more urgent.

“I had a gay student sitting in my office one day who said he wanted to kill himself,” Jennings remembered. “When I told him not to he said, ‘Why shouldn’t I, my life isn’t worth saving, anyway.’” The conversation deeply troubled Jennings, who had himself attempted suicide at age 16.

In an essay for the 2008 book, Crisis: 40 Stories Revealing the Personal, Social, and Religious Trauma of Growing Up Gay in America, the boy becomes Thompson.

One morning, Thompson sat in my office and confessed that at times he had thought about ending it all rather than struggling to be gay in a homophobic world. Startled, I immediately launched into a lecture about how much he had to live for, about the promise the future held. He cut me off: “Why shouldn’t I? My life isn’t worth saving anyway.”

And then in the book, Always My Child, Jennings makes it clear again that he advised this boy about sexual behavior.

Media Matters is making the case that Jennings did not give ongoing sexual advice to the boy because in his 2000 speech to GLSEN-Iowa, he said “I hope you knew to use a condom” (past tense). However, I think the references to “adventures,” “safe sex,” and condom use indicate that the advice was ongoing.