According to Exodus President, Alan Chambers, you won’t be able to find this reference to PFOX (Parents and Friends of Ex-gays and Gays) on the Exodus website much longer. 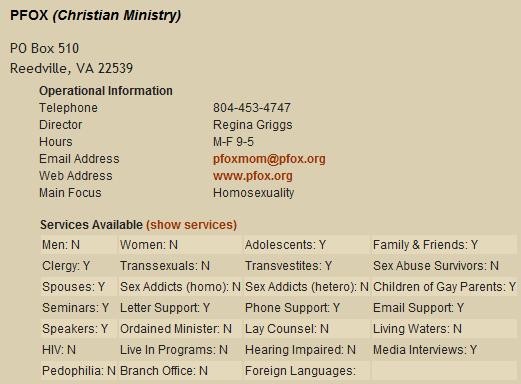 Within the last couple of weeks, PFOX gave up affiliation with Exodus. While Chambers declined to give reasons for the PFOX move, he indicated that Exodus would not seek any future relationship. He noted that PFOX is a public policy organization and their activities do not fit in with the mission and direction of Exodus. I have asked Regina Griggs, Executive Director at PFOX, for comment and will report the reason for their decision if disclosed.

PFOX seems to be alone among conservative groups in advocating for ex-gays using civil rights language. I recall thinking this was a strange framework for a group that really doesn’t believe homosexual orientation exists. In any event, PFOX and Exodus has not been a good fit on many levels so this separation is a good move.