Sarah Palin denies claims of wrong doing in an exclusive article in her hometown paper, the Frontiersman.
On an issue, I have covered here and am about to cover in greater detail, Palin remarks on her real record of support for disabled people. She has actually done more than she reports here which I will document in coming days (e.g., the waiting list was 1300 when she took office and her administration is committed to eliminating the list).

9. You’ve stated on the trail that you would be an advocate for families with special needs, yet the state of Alaska has a Developmental Disabilities Waiting List with more than 900 people waiting for the critical assistance they need. The latest report said it would take $45 million dollars to eradicate this waiting list. What is your administration doing to address the issues that families with special needs face?
In March 2008, I signed legislation reforming Alaska’s education funding formula to bring more accountability and predictability. The legislation increases funding for students with special needs from $26,900 to $73,840 per student. It is our hope that by providing the necessary funding support, we can touch more children with special needs who did not have opportunities before due to the prohibitive costs of providing the appropriate care. I’m an advocate for special needs children. Ever since I took the chief executive’s job up North, I’ve pushed for more funding for students with special needs. It’s touched my heart for years, especially with the beautiful addition to our family 13 years ago, of our nephew with autism, then with the birth of our beautiful baby boy, Trig, we joined so many American families that know that some of life’s greatest joys come with unique challenges. We’re going to make sure the government is on their side. John McCain and I have a vision of an America where every child is cherished.

In her interview with Katie Couric, Sarah Palin comments on abortion, homosexuality and origins.
I suppose the media now will attempt to track down Palin’s dear gay friend.
Stay tuned.

CNN Money has an article on alternatives to a bailout if no deal is done.

Among the steps that the government could undertake are:
-Suspend so-called mark-to-market accounting rules, which during the past year have required financial firms to write down more than $500 billion in losses.
-Change federal requirements that force banks to keep a certain level of cash on hand for every dollar they lend out.
-Give banks the chance to exchange loan notes for notes from the Federal Deposit Insurance Corp. As a government agency, the FDIC’s notes would be more valuable than the banks’ notes, allowing the banks more flexibility to make loans.
-Purchase on a massive scale mortgage-backed securities issued by finance giants Fannie Mae and Freddie Mac. The Bush plan calls for the Treasury to buy a broader range of mortgage-backed securities.
-Extend limits on short sales of financial sector stocks.
-Cut the fed funds rate – the Federal Reserve’s target for short-term lending – perhaps all the way to zero, or in coordination with rate cuts by other central banks around the globe.

Feel free to post links in your comments to other alternatives…

In his book, The Language of God: A scientist presents evidence for belief, Francis Collins has this to say about homosexuality on page 260:

An area of particularly strong public interest is the genetic basis of homosexuality. Evidence from twin studies does in fact support the conclusion that heritable factors play a role in male homosexuality. However, the likelihood that the identical twin of a homosexual male will also be gay is about 20% (compared with 2-4 percent of males in the general population), indicating that sexual orientation is genetically influenced but not hardwired by DNA, and that whatever genes are involved represent predispositions, not predeterminations.

On the web, there are a number of sources who have quoted the OneNewsNow report that Francis Collins said the following:

‘Homosexuality is not hardwired. There is no gay gene. We mapped the human genome. We now know there is no genetic cause for homosexuality.’”

The problem is – Dr. Collins did not say this. As I noted here, Dr. Collins confirmed to me that he did not make this statement. He did say this:

It troubles me greatly to learn that anything I have written would cause anguish for you or others who are seeking answers to the basis of homosexuality. The words quoted by NARTH all come from the Appendix to my book “The Language of God” (pp. 260-263), but have been juxtaposed in a way that suggests a somewhat different conclusion that I intended. I would urge anyone who is concerned about the meaning to refer back to the original text.

The evidence we have at present strongly supports the proposition that there are hereditary factors in male homosexuality — the observation that an identical twin of a male homosexual has approximately a 20% likelihood of also being gay points to this conclusion, since that is 10 times the population incidence. But the fact that the answer is not 100% also suggests that other factors besides DNA must be involved. That certainly doesn’t imply, however, that those other undefined factors are inherently alterable.

Your note indicated that your real interest is in the truth. And this is about all that we really know. No one has yet identified an actual gene that contributes to the hereditary component (the reports about a gene on the X chromosome from the 1990s have not held up), but it is likely that such genes will be found in the next few years.

Note this part of the quote: “That certainly doesn’t imply, however, that those other undefined factors are inherently alterable.” Sexual attractions may come from the operation of several factors, in different ways for different people. The nature of the cause however, does not directly lead to understanding of how alterable the attractions might be. Perhaps attractions develop with some mix of environment and pre-natal factors. However, once set, attractions for most people seem to be pretty durable.

Go here for the entire post describing the confusion over what Collins said. 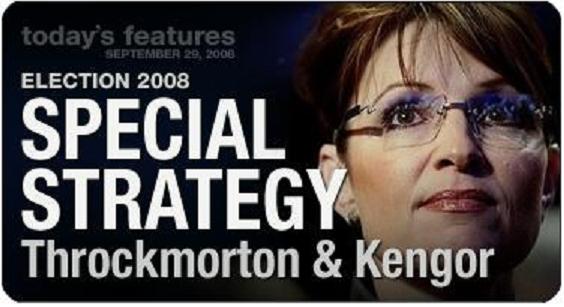 Paul Kengor and I have an article in today’s National Review Online which addresses the claims that Sarah Palin cut the budget of the Special Olympics.

My Representative, Phil English, (R-PA) voted against the financial bailout package today. Here is his statement in support of his stance.

Contact: Julia Wanzco (202) 225-5406
News for immediate release
September 29, 2008
English Responds to House Vote on Financial Rescue Package
Washington, D.C. – Today, the U.S. House of Representatives voted on the Economic Stabilization Act of 2008, legislation aimed to restore confidence in the American financial markets. U.S. Rep. Phil English (R-Pa.) a member of the Joint Economic Committee, voted against the legislation and released the following statement:
“From the outset, it has been my strong belief that any rescue proposal necessarily include real consequences for bad actors, strong taxpayer protections and accountability and transparency of any tax dollars used. I believe that the bill considered today failed to meet these minimum thresholds. Despite my belief that the right action by Congress could have a positive effect, this bill’s flaws and unchecked risk to the taxpayer, in my view, outweighed any potential benefits.
“This legislation fails to encompass critical financial safeguards for taxpayers, savers and the economy as a whole and lacks clear parameters and shifts the power to unelected bureaucrats in the Treasury. The bill creates a program where the same people whose mistakes have hurt the financial system will be able to game the auctions and leaves open the door for golden parachutes for top executives. And, while included on a limited basis, the insurance program is not the centerpiece of the initiative.
“There are weak guarantees of oversight as well as weak taxpayer protections. This legislation allows the program to be used for non-mortgage debt like credit card debt, forces taxpayers to bailout foreign banks, and turns over more than five percent of the Gross Domestic Product to Treasury with only very broadly defined terms.
“Further, the bill fails to get at the core problem which created this mess. Finally this measure overlooks opportunities to attract new, private capital into the market to help stabilize the marketplace.
“While I support the need for congressional action to stabilize the credit markets, the legislation negotiated by the Bush Administration and congressional leaders created a Rube Goldberg device that was ineffective in bolstering the economy, protecting the taxpayer or restraining the authority of the central government.”
The Economic Stabilization Act of 2008 failed to pass the House floor today by a vote of 205 to 228.
-###-

Politico.com has this summary.
Public sentiment is very strong against a bailout. Word is there will be another vote. Armtwisting must be intense.

Let’s have an online focus group; which candidate does this ad help with undecided voters?

Here is the discussion draft of the Emergency Economic Stabilization Act of 2008 just out today.
Copies are floating around but it is next to impossible to get to www.financialservices.house.gov. I suppose any official revisions will be posted there.
UPDATE: DC Examiner has a great side-by-side comparison of the initial bill, the Democratic bill and the current bill referenced above.
I am glad to see ACORN has been removed.
UPDATE: The House website is accessible again and there is a summary of the bill. Michelle Malkin raises some points of concern about the bill here. I think her reading of the Fast Track issue seems right. I am used to reading mental health bills and do not know this area well. However, I interepret the legislativease to mean that the Congress has 10 days to object after Paulson submits a request for anything over 350 billion. If Congress does not object, he is free to drawn down more billions to buy up bad paper.

See the details at Politico.com…
According to John Bresnahan:

This is an e-mail circulating among New Democrats, a group on progressive Democrats, on Sunday morning that lays out some of the details of the Wall Street bailout package agreed to by House, Senate and White House negotiatiors late Saturday night.
Here’s the full text of the e-mail, which was sent out about just before noon today: “Below is an update on everything that has happened with the economic rescue package. The deal is done and agreed to by all parties.

Go over to Politico.com to read the email. Mixed signals are coming from the media. Apparently, House Republicans are not happy about it but enough may vote for it that it will appear to be bi-partisan. My guess is that voter sentiment is so strong against a bailout that it would not be helpful for some Reps to vote for it since they will be facing voters soon.
It is astonishing to me that some Dems wanted to put 20% of the profits toward subsidies for housing.