In the first part of my review of the NARTH fact sheet on female homosexuality, I critiqued the empirical foundation of the NARTH theories about causation of female same-sex attraction.
In this post, I examine the statements regarding sexual abuse and causation. It may be surprising to some observers to read this:

Although sexual abuse does not directly cause same sex attraction, studies report male sexual abuse of lesbians as generally being twice as high as of heterosexual women, that is, on average, 50 percent of lesbian women report a history of sexual abuse. (26, 27) If family relational dynamics and gender nonconformity are already in place, sexual abuse can clench the direction of detachment, gender insecurity, and disidentification possibly leading to same sex attraction.

The article does not specify sexual abuse as a direct cause of same-sex attraction. However, the author does believe that being abused as a child can push a girl in that direction if she suffered detachment from her mom and was gender nonconforming as a child.
I checked the references offered by NARTH for the assertion that sexual abuse of lesbians by men are “twice as high as of heterosexual women” and that “50 percent of lesbian women report a history of sexual abuse.” I cannot find these statistics.
Reference 26 is to a survey of lesbians, gay men, and bisexuals and their siblings by Balsam, Rothblum, and Beauchaine in 2005 (see reference list at the end of the post). In this study, the authors used a convenience sample of same-sex attracted people and asked them to recruit a sibling to participate. They reported childhood sexual abuse (CSA) prevalences for straight (30.4%), lesbian (43.6%) and bisexual (47.6%) female participants. The effect size of these differences are very low, between 1-2%.
Reference 27 is to research reported in the Journal of Gay and Lesbian Social Services by Hughes and team in 2000. In this study, forty-one percent of lesbians reported CSA while among straight women the number was 24%.
The NARTH article adds:

Sexual abuse can be emotional, verbal, or physical. A girl who is sexually objectified though inappropriate sexual comments, denied age appropriate privacy or whose father has voyeuristic tendencies, has been sexually violated without ever being touched. (28, 29)

I do not contest that the paternal behaviors referenced here are inappropriate and potentially harmful. However, the references for these statements does not provide research support for the statements about CSA. One, (29) is not to a research study but to a book for a lay audience by Janette Howard and the other (28) is a 1991 research study by Peters and Cantrell which failed to discriminate lesbians and straight women via abuse variables.
There are some discouraging percentages in this literature but they apply to women overall, with a moderate elevation for lesbians. Here is what I found in a brief PsychLit search. 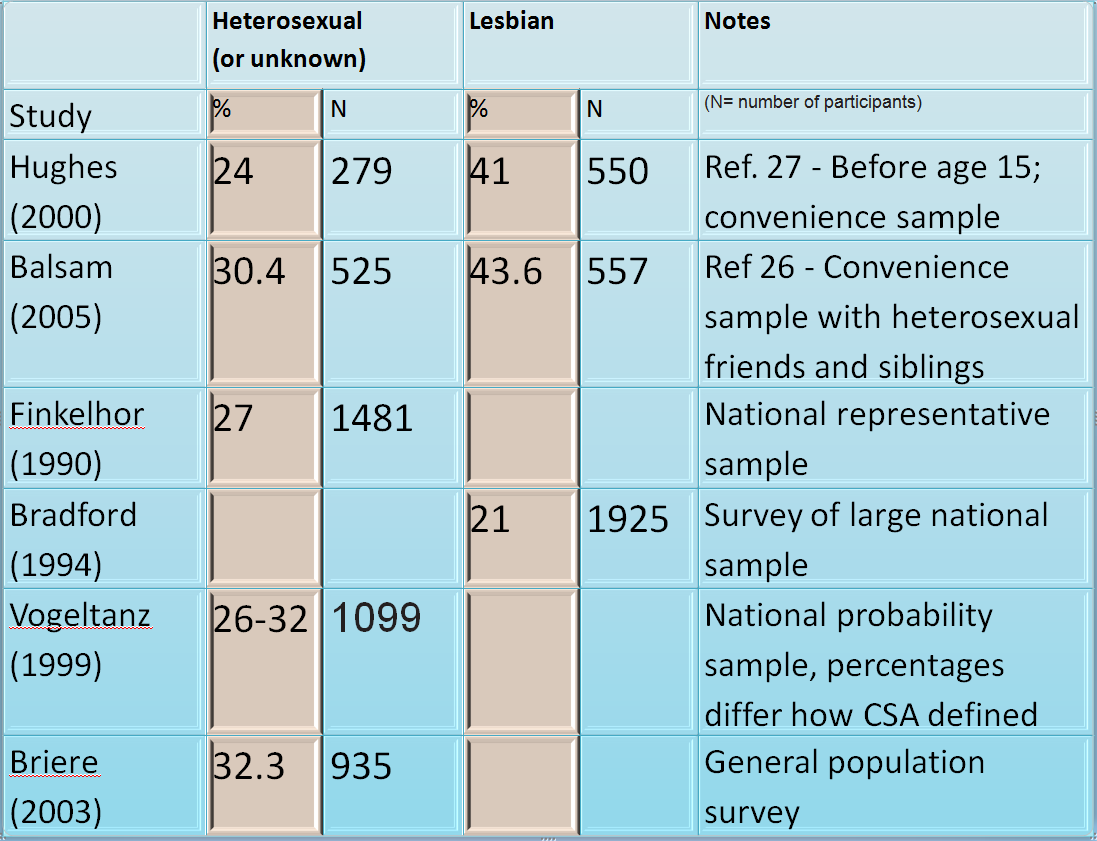