A anonymous Mankind Project member mailed me what was labeled a handbook for leaders of Integration groups. Integration groups follow up the New Warriors Training Adventure. According to the manual, these exercises are

for the use of I-Groups that have reached a proficient level of self-facilitation. The value in many of them will be realized only by a deep commitment on behalf of the group to process the feelings evoked.

There are some which seem innocuous enough such as writing oneself a letter, volunteering for charities and staffing a NW training.

Others seem more provocative and sound a lot like Gestalt inspired group therapy techniques. Here is one that would likely be close to Richard Cohen’s heart.

One of the powerful scenes we set up on the weekend is based on being held in the arms of the good father. Have men on their own write the things they wanted to hear from their fathers but never did. Have men bring the letters to the next meeting. If at all possible arrange to have elders or men from your community show up the next week to hold these men and read the letters to them. If men from outside the I-Group are not available use the men from the group. This basically is a re-play of the set up we use on the weekend. The difference is that men may have more difficulty dropping into a similar place not having just completed a piece of work. Try not to put weekend expectations on this process but simply see it for what is presented in the moment. Work with men to increase their awareness of body response. Resistance, grief or passive acceptance are all felt in the body. Another option is to have men choose the man they want to role-play from the community at large, then bring him along to the I-Group. This also has the potential to identify the men in the community most admired for their fathering abilities.

I suppose if I allowed myself to be held, I might experience a sense of dependency. However, I submit this could happen to almost anyone, whether the man had fathering issues or not. The situation makes it more likely that such feelings would be elicited. It is more likely that I would feel tense and uncomfortable. A person trained to look for these reactions as a defense might then say I was defensive and thus clearly had father issues that need resolved. Only those in the NMTA can speak to this. I have been around the therapy world long enough to know counselors who look at all client reactions as theory-guided indications of pathology.

Here are a couple of others that would be a bit more intimate:

Pair up the men in the group and announce that this evening we will give massages. After the first half of the men have received a massage tell the men no more massages will be given. Lead a feeling check, first with the men who gave the massage and then with the men who received.

1. Would you have given knowing you would not receive?

2. Is there a sense of betrayal, and with whom?

3. The men who received. Do you feel you got away with something? Or do you feel like you are beholden to the man you received from? If so why?

4. Let this check in progress wherever it goes. How does this reflect our expectations when we offer some gift of service?

This exercise may also belong in the play section, but it’s definitely a stretch when it comes to intimacy. The set up goes like this. Have all the men remove their clothing and then have each man choose someone else’s clothes and put them on. Once everyone is dressed assume the characteristics of the man whose clothes you wear. Check in with one another and decide on an exercise that will give an opportunity for interaction with one another. Stay in role through the entire evening. Leave time at the end to process the feelings that have come up.

1. How accurate was the role-playing?

2. Did men see a different side of themselves as a result of seeing other men portray them?

Don’t neglect the hurt feelings. Exaggeration will cause a certain amount of misunderstanding. Give one another feedback on projection and shadow, how it appeared and how it was dealt with.

I suppose there is no law against people getting together and doing this sort of thing, but these exercises sound like they would be at home in a Gestalt and/or Jungian psychodrama paradigm. The creators of these exercises probably feel they are eliciting something buried or hidden in each man. However, I wonder if the demand characteristics set up by the exercises cannot help but bring predictable reactions.

As a probably weak illustration, consider this picture. If you had to tell a story about it, what feelings would you say it would elicit? 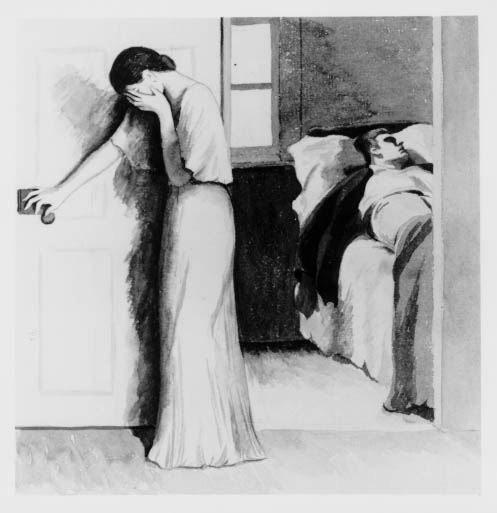 I would not be at all surprised if a depressing story was told in response to this adaptation of a picture from the Thematic Apperception Test. Would this mean the story teller was a depressed person? Perhaps, but there is no way to know since the stimulus here naturally elicits depression. Similarly, I think the I-group exercises may elicit a variety of emotions and reactions which may or may not be reflective of underlying issues or problems. My thinking here is influenced by the classic social psychology experiments such as the Stanford Prison Experiment and the Milgram studies on obedience. At this point, I am not making a solidified judgment, rather I am clumsily attempting to articulate a social psychological perspective on the NWTA and related activities.

I have not even started on the Jungian shadow thing; more to come on that topic.