Richard Cohen has issued a statement regarding his International Healing Foundation and religious affiliations. 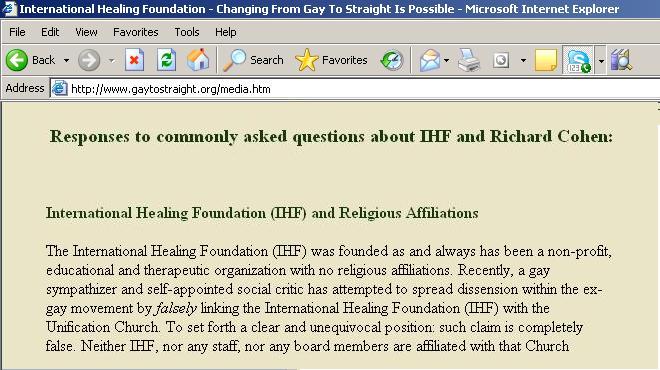 I have a copy of what appears to be the IHF Articles of Incorporation supplied by a former board member. I hope to verify them soon. They begin this way:

1. God, our Higher Power, is the center of the process of healing restoration. Without the power of God’s truth and love, true and lasting healing is not possible.

They continue in a generally religious manner. If these are current policy, it appears that IHF is indeed religious, but not sectarian.

Mr. Cohen’s website statement above is similar to a statement he issued in 2000 when this issue came up. Prior to 2000, the IHF was listed as a Moon Front Group. Compiled by Larry Zilliox and endorsed by cult expert and ex-Unification church member, Steve Hassan, the list is very long and actually referenced on a Unification church website. The list is also featured on Rick Ross’s website. The IHF is still on the list but also includes the following statements from Richard Cohen regarding the Unification Church.

International Healing Foundation P.O. Box 901, Bowie, MD 20718-0901 Phone (301) 3… Richard Cohen, Director. Mr. Cohen is author of the book “Coming Out Straight,” which is about “a successful treatment plan for transitioning from homosexual to heterosexual.” Within this book Cohen tells of his “own story of coming out straight [and] about [his] spiritual journey from Jew to Christian to moonie and back to Christian” again. Richard Cohen advised (Feb. 13, 2000) that his “foundation was never a project of the Unification Church [and that he] left the Unification church in 1995…[and] joined a local Christian church two years ago.”

In a recent statement (Feb. 16, 2000) Richard Cohen concluded, “I DO NOT believe Rev. Moon is the messiah…[nor that] Rev. and Mrs. Moon are ‘true parents’ or serve as role models. I under no uncertain terms, support ANY activity or program of the Unification Church.”

Recent questions regarding the IHF and the UC must be seen in the context of persistent concerns raised by cult experts and observers since the IHF was initially listed as a group with Moon connections. I believe the questions are fair in light of clear evidence of UC involvement by IHF staff and board members not long after these denials were issued. See my prior posts here and here.

It is also worth noting that the Unification Church is actually not an entity at present but, in 1997, was absorbed into an entity Rev. Moon set up called The Family Federation for World Peace and Unification. Read this internal communication which addressed the confusion experienced by those in the movement about the change from church to family federation. It would be possible to claim one is not a member of the Unification Church and still be involved with the Unificationist movement or Family Church federation. On this point, Sun Myung Moon declared in 1997:

Therefore we can build the Kingdom of God here. As Unification Church Blessed couples, if we truly fulfill the role of tribal messiahs, there is an automatic extension. That is why we can truly restore this world into the Kingdom of God. For this purpose, Father took down the HSA-UWC sign and placed a new sign: The Family Federation for World Peace and Unification.

In a history of the Unification Movement, there is a reasonably candid description of this change, referring to Moon’s requirement for a change of name and focus. Church leader Damian Anderson comments further about the name change here.

Another aspect of the Unification Movement that creates confusion is the similar sound of Unification theology to traditional Christian doctrines. Read this 2001 note regarding Christ from US Unification leader Michael Jenkins:

The Associated Press has recently reported incorrectly the beliefs concerning Jesus and the faith of the Family Federation for World Peace and Unification (formerly the Unification Church founded by the Rev. Sun Myung Moon).

An August 14th article entitled “Vatican:Archbishop Giving Up Wife” states incorrectly, “For instance, Moon’s followers regard Moon as the messiah who is completing the salvation Jesus Christ failed to accomplish.”

The church affirms Jesus Christ as Lord and Savior and that his mission was successful in bringing salvation through the blood atonement. Because of the rejection of the chosen people to receive Jesus, the promised Kingdom of God did not come at that time but was prolonged until Jesus return. This prolongation was not a failure on Jesus part but of that of the people who God had prepared to receive Him.

The Unification teaching doesn’t associate the lack of the faith of the people to receive Jesus with any failure on Jesus’ part. Their rejection caused a prolongation of his mission and calls for His return.

Unification teaching affirms Jesus as Lord and Savior. In a recent publication of Rev. Moon’s teaching, The Life and Mission of Jesus Christ (HSA Publications, 2001), Rev. Moon has stated, “…Jesus is the only begotten Son of God…. That is why He is the Savior. Therefore it is only through Jesus that we can be connected to the lineage of God.”

Now I must hasten to add that much of what I have written here may have no relevance to Mr. Cohen’s IHF. By this point, I am developing some interest in understanding the Moon organizations. I am trying to understand how this organization operates to try to make sense of the statements of Mr. Cohen and Mrs. Wiemann and what I read on the Unificationist websites involving them (much of which is fast disappearing as someone is altering most of the websites). Again, readers must decide what if anything is relevant or important.