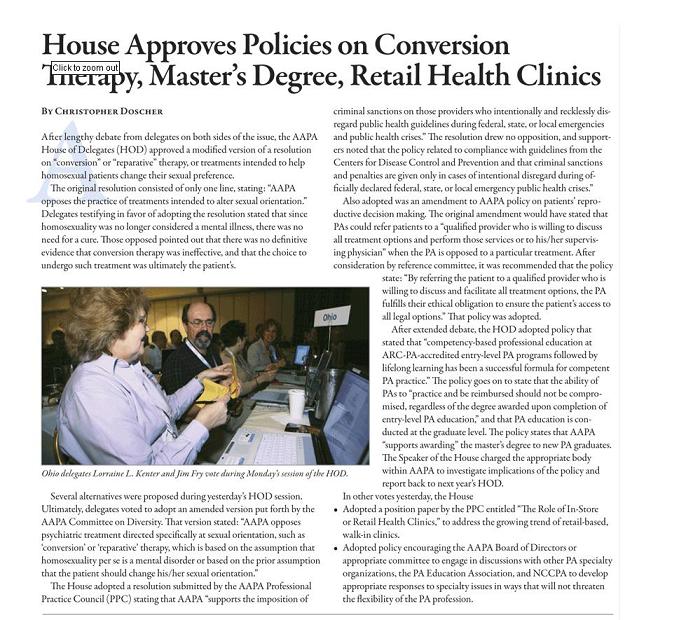 Yesterday, I reported the action taken by the House of Delegates of the American Academy of Physician Assistants regarding reparative therapy. I want to provide more detail in this post. As you can see from the association’s daily conference newsletter, the resolution was changed to reflect AMA policy and thus was a step back from the exclusive proposal submitted by the Committee on Diversity.

The policy described above (slightly different from what I reported yesterday) is:

The original resolution proposed by the Committee on Diversity discounted any evidence that demonstrated benefit for change therapies. I helped construct a substitute resolution that found support from some, but not enough of the delegates. The substitute resolution respected religious, and sexual orientation diversity.

Robert Spitzer supported the substitute resolution and provided a letter of support for it.

In the end, the delegates opted for a stance that opposes seeing homosexuality as an illness and coercing clients into counseling for their sexual orientation.

UPDATE: Apparently, the discussion regarding the various reparative therapy motions was intense. At one point, John Fields, president of the Vietnam Veterans Association of Physician Assistants read several paragraphs from the Spitzer letter on the floor. At that point, AAPA president Mary Ettari asked the Delegate Speaker to address the House of Delegates to question the source of the letter. According to Mr. Fields, sitting presidents rarely interrupt meetings to address the entire House. According to Ms. Ettari, she questioned the letter because she had not seen it before, it was not on letterhead and it was not signed in ink by Dr. Spitzer (there was a digital signature). Apparently by some miscommunication, the letter never did make it to the PA leadership. Ordinarily, colleagues would give each other some trust about such things, but the debate over this resolution seems to have eroded this usual stance.

UPDATE: The AAPA issued a news release today regarding a variety of actions taken at their convention. Thanks to David Roberts for pointing this out. The relevant point to this post is as follows:

The HOD voted to oppose attempts to â€œcureâ€ homosexuality and adopted the following resolution about reparative therapy: â€œThe American Academy of Physician Assistants opposes any psychiatric treatment directed specifically at changing sexual orientation, such as â€œconversionâ€ or â€œreparativeâ€ therapy which is based upon the assumption that homosexuality per se is a mental disorder or based upon the a priori assumption that the patient should change his/her sexual orientation.â€