Regarding a controversial article on the NARTH website by Dr. Joseph Berger about gender variance, I received this statement from Dr. Joseph Nicolosi this evening:

Narth disagrees with Dr. Berger’s advice as we believe shaming, as distinct from correcting can only create greater harm. Too many of our clients experienced the often life long, harmful effects of peer shaming. We cannot encourage this.

UPDATE: As has been noted by commenters here, NARTH pulled the offensive post by Dr. Berger on their blog and left this note:

We have pulled the discussion on gender variant children in Oakland. The article contained comments that were deemed offensive to many readers and failed to accurately express the overall views of the physician who expressed them.

We apologize for publishing the article without getting proper clarifications first about how children with gender identity disorders should be treated by parents, teachers, and counselors.

The article remains on the website but I suspect it will be pulled soon.

UPDATE: The article has been removed from the website. No explanation has been posted on the main website as of 9/2/06.

An anonymous commenter left these thoughts on my Ex-ex-gay? post. I thought they were refreshing in their honesty and provide another perspective not often heard. I wanted to give this point of view some additional exposure so with the permission of the gentleman who made the remarks, here they are:

I’m not worried about Dr. T “endorsing” these marriages. Surely he will not be endorsing each and every one of them, encourageing ALL such couples to marry and follow the advice he comes up with.

Then, it must ultimately come down to the individuals, their evaluation of their relationship in light of hopefully honest communication and the best information they can come by. Happiness, as an individual or as a couple, is dependent on many different factors, and different factors for different folks, and, from what some writers have said, factors that may change over time.

Personally, I do not see a “mis-match” of sexual orientations as necessarily, eventually detrimental to a relationship. People have many different conceptions of sexuality, spirituality, relationships, and, yes, happiness. Does the man or woman who is primarily attracted to the same sex (yes, sexually) have a fighting chance within the context of his/her marriage and social circumstances to continue to grow as an integrated, whole person, especially including in terms of sexual orientation, personal identity and meaning, and self-esteem? Part of the answer may also lie in the past social circumstances of childhood and adolescence, in which the psyche and self-esteem of the gay individual is in formation. (My preference for terminology is revealed: I’m gay, to me we’re all gay who have shared a particular internal experience — which varies amongst individuals, no doubt — as we were growing up, WITHIN a social environment that supported things like shame, denial, repression… in those who did not fit THE MOLD.

Admittedly, I am only 13 yrs. and two children into a “mixed orientation marriage”. Ironically, since having children and going back to work full-time when I took over as Mr. Mom 7 yrs ago, it is my wife who is less interested in sex than I am. I will add that I never set out to become any less gay than I was during the six years in my twenties when I was Out, and socially and politically active. I kept my gay friends, the ones who kept me anyway, and my gayness has continued to be an open topic of discussion with my wife, my parents, good friends, etc. More recently, I’ve been making some new gay friends through support groups. What I did do was change my behavior, and some mental habits that tended to focus my mind on the importance of bodies, sexual attractions, and satisfying my “needs”. For me (so far) spiritual needs, relationships, identity, transcend the physical and psychological. (The primary stimulus for my motivation and spiritual development has been the Baha’i Faith.) While I did not set out to change my sexual orientation, I have found that it’s evolved somewhat over the years of being married, say from 95%/5% toward other men/women, to about 85%/15%. But, more importantly, if it’s not about my wife, my mind doesn’t linger too long, or attach too much importance to it. I wouldn’t deny that this issue is an added source of stress for me and my wife and our marriage. But we share a strong commitment to faith and marriage and family, we work through issues and toward greater emotional intimacy like any couple that’s trying to make things work for the best.

These are my views at the moment, but I can certainly understand how others would see things differently and appreciate the perspectives that have been shared here.

Here’s how it happened… 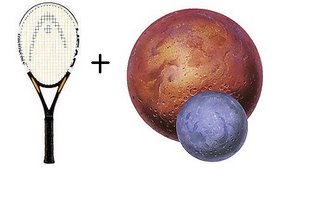 Nick Cummings has seldom been wrong about trends in psychology and I do not believe he is incorrect now. These remarks were presented at the APA convention in New Orleans, August 12, 2006.

Dr. Cummings is a past-president of APA and an innovator of the first order. He was a pioneer in managed behavioral healthcare and continues to lead the profession in providing state-of-the-art solutions to psychological service delivery. If you care about psychology as a profession, this is a must read: The APA and Psychology Need Reform.

This just in from APA’s Public Affairs office via email from Rhea Farberman:

During the Town Hall Meeting that took place at APAâ€™s 2006 convention, I was asked about the role of patient choice in therapeutic interventions to diminish same-sex attractions.

This is an extremely complex issue. And discussion of it must balance patient choice with the therapistâ€™s ethical obligation to obtain informed consent for any therapy process.

The issue centers on patient choice and the role of the therapist in supporting that choice with fully informed consentâ€”be it sexual orientation or any other behavior or emotion.

In a full multifaceted therapeutic relationship, the therapist has every duty to respond to patient choice and to help patients achieve their goals. I affirmed during the Town Hall discussion, and I will always affirm, the crucial importance of providing our services with careful attention to patientsâ€™ wishes.

BUTâ€”and this is absolutely essential, especially when dealing with sexual orientationâ€”the therapeutic responsibility, in strict accordance with APA guidelines, MUST also include the following considerations:

One: The therapist has an obligation to carefully explore how patients arrive at the choices they want to make. Therapists must determine whether patients understand that their motives may arise purely from the social pressures of a homophobic environment. No type or amount of individual therapy will modify societal prejudices.

Finally, I would add that our patients ought to know from the very start that we as their therapists do not consider homosexuality a mental disorder. In fact, the data show that gay and lesbian people do not differ from heterosexuals in their psychological health. By that I mean that they have no greater instance of mental disorders than do heterosexuals.

Dr. Koocher is the President of the American Psychological Association.

In a Q&A today at the American Psychological Association convention in New Orleans, APA president Gerald Koocher was asked about a client’s right to seek therapy to modify same-sex attraction. He reportedly said (and I am seeking confirmation from the APA) that clients may seek psychotherapy to affirm their religious values even if that meant that the therapy involved objectives to modify same-sex attractions. He reportedly said that it would not be outside the APA’s ethical guidelines to work with such a client toward the client’s chosen course, even if that course meant seeking to reduce or eliminate same-sex attractions.

Update: I spoke with David Blakeslee who was in the Q&A and asked Dr. Koocher a question about APA guidance regarding clients who have religious conflicts surrounding sexuality. Dave’s question went something like this: “Dr. Koocher, I appreciate you participation in constructing and presenting guidelines for ethical behavior and attended your conference in Portland 18 months ago which I found very helpful. As a social and religious conservative I have found myself in a difficult situation about which I think the APA has not provided sufficient ethical guidance. I have been sought out by clients with deeply held religious beliefs who also have unwanted same-sex attractions. For these persons their religious beliefs are even more important to their identity than their same-sex attractions. Because of APA’s lack of guidance in this matter, I am forced to seek advice outside APA. What is APA doing to give explicit guidance to psychologists like myself and thereby ensure that treatment of my clients honors their deeply held religious beliefs as they struggle with their same-sex attractions and is consistent with APA values of self-determination and client autonomy?”

In addition to what I reported above, Dr. Koocher reportedly emphasized that the therapeutic relationship is constructed by both the client and the therapist along the goals of the client and that the whole person must be taken into account when considering an intervention.

Dave tells me that Dr. Nicolosi followed up with a comment that his response seemed in conflict with official policy of the APA on homosexuality and that clients sometimes come to therapy wishing to explore their potential for heterosexual attraction; to which Dr. Koocher reemphasized his position of client self-determination and then cautioned about coercion.

I have heard back from Rhea Farberman, of the APA Publication Office this morning that she will soon give a complete response to my request for confirmation. She did add this:

In brief, this is a complex issue and one about which we seek to balance patient choice with the therapistâ€™s obligation to gain informed consent. There are also questions about the efficacy of therapies intended to change sexual orientation and potential harm of such techniques. APAâ€™s position is based on the standing Council of Representatives resolution on the topic.

Hit the link for the APA’s official statement. Anything that is said here or is said anywhere must be interpreted in light of that resolution.

My take on this is that the APA has stopped short of banning change therapies but guides psychologists to inform clients of the APA position on homosexuality, to forbid coercion, to oppose therapy that has as its premise homosexuality per se is a mental disorder and to avoid making public statements that cannot be supported.

Now where have I read guidance consistent with that…

Gay365 is reporting a statement from the APA in response to the Exodus/NARTH protest this morning. I have a call in to the APA press office to verify it since I can’t find it online as yet.

Update: Pam Willenz from the APA confirmed the statement which will be released to the press today:

“For over three decades the consensus of the mental health community has been that homosexuality is not an illness and therefore not in need of a cure. The APA’s concern about the positions espoused by NARTH and so-called conversion therapy is that they are not supported by the science. There is simply no sufficiently scientifically sound evidence that sexual orientation can be changed. Our further concern is that the positions espoused by NARTH and Focus on the Family create an environment in which prejudice and discrimination can flourish.”

Here is the AP’s story about the protest. 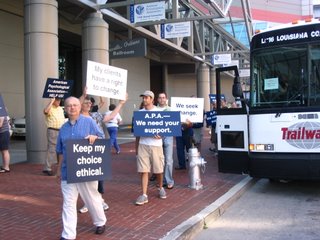 I’ve known about this for some time but it is now public. Exodus and others plan to protest at the APA convention in New Orleans on Friday. I had planned to go observe but logistics are keeping me in the Grove.

Wayne Besen plans to attend as well. Should be an interesting show.