Anyone else up watching this mess?
Politico just sent out word there would be no vote tonight.

I noted earlier that Michele Bachmann declared today that her husband and their business were not running for President and thus, she would not answer questions about his policies or practices.
However, earlier this year, Bachmann thought Michelle Obama’s views were fair game. Mrs. Bachmann criticized Mrs. Obama about Obama’s recommendations that women should breastfeed their babies as one means of preventing childhood obesity. Bachmann accused the First Lady of promoting a “nanny state.”
As an aside, since nannies bottle feed, wouldn’t that be a “mommy state?”

Today, at the National Press Club, Michele Bachmann was asked about her husband’s clinic. She avoided the question again.

This time there was no shoving or tossing mics, but she again dodged the issue.
Of course, these are fair questions for people to ask. She will get these questions until she can come up with some narrative about the clinic that will satisfy the media. Obama had to deal with his church, his business dealings (Bachmann is co-owner of the clinic), his family, his birthplace, etc., etc., and so will she. When he didn’t answer questions, his opponents insinuated he had something to hide. None of this is strange or new. What is remarkable to me is that after three weeks she still has no coherent reply.

I spoke yesterday with Ugandan MP Hon. Otto Odonga who told me that the Parliament will bring back the Anti-Homosexuality Bill soon, perhaps “by the end of August.” Although the re-introduction of the antigay bill had been expected, Odonga said the bill is “back from the perspective of the new parliament starting from where the last parliament ended.”
Since the end of the Eighth Parliament, observers have speculated that the Ninth Parliament might not require re-introduction of bills deliberated upon but not passed. Two weeks ago, the Speaker of Parliament, Rebecca Kadaga, held a meeting with the chairpersons of all Parliament’s committees to orient them to their new positions. Also, in order to save time and expense, the group decided to bring forward at least three bills to the new session: the Government Assurances Bill, the Marriage and Divorce Bill and the Anti-Homosexuality Bill.
In a prior post, I outlined a pretty close approximation of what the Parliament will be debating.

Yesterday, I posted a piece at Religion Dispatches about the response of Ghana’s government to my inquiries about the recent calls for arrests of gays. Here is the lead:

In the face of reports that Ghana’s Western Region Minister recently called for the arrest of gays, a Ghanaian government source told RD today that the government was not “clamping down” on sexual minorities. The source, who did not want to be named since he was not speaking officially, said that Ghana is a law abiding country and that those on a crusade should take up the matter in the courts.
The issue appears to be a sensitive one for the government. The Ministry of Information and the Office of the President declined to speak to me and one staffer simply hung up when asked if the government supported recent calls to arrest gays.

Go read the rest over at RD.
UPDATE (7/28/11) – Reached the President’s office today and the spokeswoman there said she was not authorized to talk about the President’s position on the call for arrests of gays in Ghana. The Communications Director who she thought might comment was out until Monday.

Why won’t Michele Bachmann discuss her counseling clinic?
Nearly three weeks after The Nation and Truth Wins Out published separate accounts of sexual orientation change efforts at their Minneapolis-area clinic, Bachmann continues to avoid media questions about the matter. As was demonstrated by her response to questions Sunday at a campaign event in Davenport, IA, her inability to handle the issue has allowed the story to live on.
Late yesterday, WQAD reported that they were snubbed by Bachmann over a prior interview during which a reporter asked about the Bachmann counseling center. Photojournalist Chuck McClurg said he was blocked from filming Bachmann speaking and was told “’due to the interview last week WQAD would not have an interview’” by the Bachmann campaign.
According to McClurg, a reporter from another station then raised questions about the Bachmann’s clinic. At that point, a campaign staffer took the microphone from the candidate, and “tossed it to the reporter,” ending the interview. Despite being promised an interview, Bachmann never emerged from her campaign bus. According to the WQAD report, McClurg said, I’ve been a photojournalist since 1988 and I have logged some 3,000 items. I’ve never been snubbed like I was (here) yesterday.”
Surely, the Bachmann campaign could find something to say about a clinic she once touted as an example of small business creating jobs. Initially, I thought the story might help her with socially conservative Iowa voters. However, now I think the issue serves to expose significant weaknesses in Bachmann as a candidate which the Obama campaign will easily exploit.
Obama will point to her indecision, her lack of transparency, and avoidance of public scrutiny. Never mind that such could also be said for the President. Heavy handed tactics might have worked for the Obama campaign in 2008, but they will alienate GOP voters in 2012. This issue should be a relatively easy one for Bachmann. Bachmann’s stonewalling leave her open to speculation that the clinic is engaged in unprofessional activities or worse. The issue lives on and she has mostly herself to blame for that.

After this prayer, NASCAR could do one of two things: Make this guy chaplain or enact a wall of separation between church and race.

New York can keep their gay marriage according to Texas Governor Rick Perry.

“Our friends in New York six weeks ago passed a statute that said marriage can be between two people of the same sex. And you know what? That’s New York, and that’s their business, and that’s fine with me. That is their call. If you believe in the 10th Amendment, stay out of their business,” Perry said at an event held by the Aspen Institute in Aspen, Colo., on Friday.

I read somewhere that the American Family Association had not decided if Gov. Perry was going to speak at his prayer meeting. With this news, they might not let him in.

I will be on CNN Newsroom Sunday at 8:30am (ET) 7/24 to talk about evangelicals and reparative therapy.
I believe the focus is going to be on the recent issues relating to Marcus Bachmann’s clinic, Exodus, and Mark Yarhouse’s research demonstrating no orientation change on average in mixed orientation marriages. 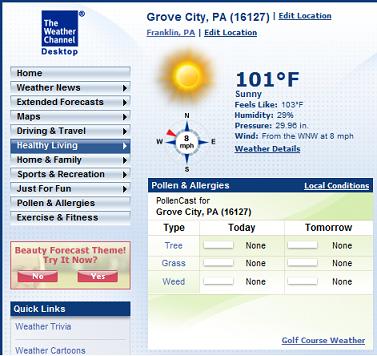 All around people looking half-dead,
walking on the sidewalk
hotter than a matchhead…

Yep, that’s about how it is…